Despite the impact of Covid-19 on all aspects of life, the City of Cape Town is pleased to have spent approximately 95% of its Urban Settlements Development Grant (USDG) in the 2020/21 financial year, earmarked for human settlements for the most vulnerable residents. 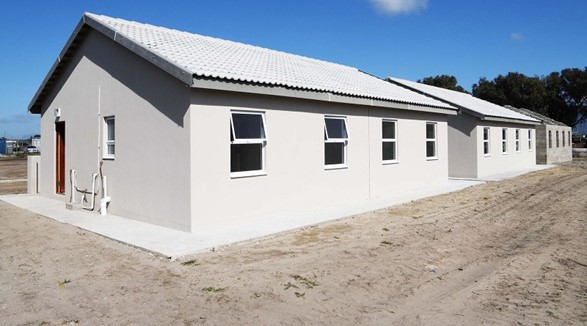 The City’s Valhalla Park housing project will be home to 781 beneficiaries. Image by City of Cape Town

Apart from the solid USDG capital performance, good delivery was also achieved on other human settlements-related grants such as the Informal Settlements Upgrading Partnership Grant (ISUPG) where a total of 99% was spent. This shows the City’s continuing commitment to deliver housing opportunities to tens of thousands of residents per year, despite a profound national housing policy shift away from the state as a primary housing provider, and huge cuts to national conditional grant funding.

USDG funding is primarily oriented towards services such as housing, informal settlements, and basic services in some of the most vulnerable communities. It promotes equality and inclusiveness and is a critically important mechanism to enable redress.

It is one of the largest transfers from National Treasury and is meant for the creation of sustainable and integrated human settlements that promote improved quality of household life.

‘The grant funding spend is a good reflection of the City’s human settlements delivery over time and is a more reliable indicator than housing numbers delivered in a particular year. This is because completed housing unit numbers and grant funding spend don’t necessarily correlate each year, as the majority of budget for a project is potentially spent in a different year to when units are completed. Any money not spent largely due to volatility, vandalism or violence in some areas are not lost. Committed funds are used as roll over funds.

‘Since 2012, the city has delivered more than 60 000 direct opportunities to the benefit of hundreds of thousands of residents. The city also continues to offer affordable accommodation to tenants in its rental stock and is driving the greater development of social housing in urban areas across the metro. This includes over 6 500 social housing units in the overall pipeline, including 2 000 in Central Cape Town and 2 500 nearing completion or about to begin construction along the Voortrekker corridor and near important economic nodes. Given the cuts to national grant funding and big national policy shift away from the state as a primary housing provider, the City’s new Human Settlements Strategy has a vision of enabling greater housing delivery through innovative partnerships with the private sector, social housing companies, and all levels of government. Between the current 2021/22 and 2023/24 financial years, the allocated capital budget for City human settlements projects is approximately R3,3 billion in total. Of this, almost R2 billion is foreseen to be spent on formal subsidy housing, while approximately R1,3 billion is earmarked for informal housing and new accommodation types to address growing informality.

‘More innovative and partnership-driven approaches will be vital to meet housing demand going forward, not just in Cape Town but in all major cities across South Africa. New ways of delivering are required so that more can be achieved with less. The City is looking to increasingly leverage municipal-owned land for the private sector to build on, and we are especially keen to see national government release their well-located mega-properties for housing, which are the largest in our metro.

‘The total capital grant funding for human settlements projects over the next three years will never be enough to address the need for affordable housing. The city is already spending almost all the capital grant funding it receives for human settlements, bar some projects where community dynamics, violence or volatility prevents completion or progress. It is also receiving less and less grant-funding for housing, with national government cutting R118 million from our Urban Settlements Development Grant (USDG) last year alone. We need to bear in mind that input costs have also increased, and there are higher costs associated with completing projects due to the impact of Covid-19. Illegal occupation attempts and community conflicts have also upped the security cost to protect housing projects and public land in general. With the national financial situation continuing to decline, we need innovation, private sector partnerships and clarity on big policy shifts that are being affected by national government with scant details still at this stage.

‘In September 2020, the National Human Settlements Minister instructed all provinces that no new housing development contracts may be entered into for the time being without national government approval; that only existing contracts for housing projects over the next three years can proceed; that beneficiaries to be prioritised include the elderly (60+ years), the disabled, child-headed households and military veterans and qualifying beneficiaries. Lastly, that serviced sites are to be prioritised in 2021/22. It is vital that national government releases more details about this policy shift,’ said the City’s Mayoral Committee Member for Human Settlements, Councillor Malusi Booi.