Bokaap residents battled police and developers yesterday in an attempt to prevent a crane from reaching 40 Lion rd, a construction site they say is gentrifying their neighbourhood and driving them out. 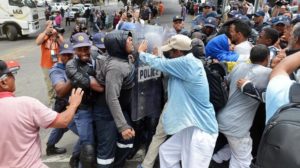 Roughly 50 protesters gathered at the corner of Buiten and Buitengracht Street in Cape Town and positioned themselves in the road between the crane and its destination. Riot police officers were deployed and pushed them into a side street with tear gas and shields. Four people were also arrested.

“Today is a clear indication of how we were bullied by the police. They fired stun grenades at children and adults. We are just people fighting for our community. How dare they come and intimidate us like this. I’m absolutely heartsore. You don’t do that to a community,” said Mishkah Samie, spokesperson for the Bo-Kaap Civic and Ratepayers Association.

The developers BLOK had already obtained an interdict to stop certain members of the public from demonstrating but say they would much rather work peacefully with the community.

“BLOK is extremely saddened by the violence … The necessary permits were in place and neighbouring homes as well as community stakeholders were provided notice ahead of the delivery, in accordance with the law. They [BLOK] have gone to great effort in their attempts to engage with the community and continue to hope for a peaceful outcome and remain willing to engage with the community lawfully,” said Lauren Fine, a lawyer at Norton Rose Fulbright who represents BLOK.

While the initial crane was prevented from reaching its destination, more by the steepness of the hills than the community, a different one was later deployed successfully.