By Ntsako Khosa
The democratic government inherited apartheid’s legacy of spatial planning which placed poor communities away from economic, social and educational opportunities.

The National Development Plan recognises this and states that ‘new spatial arrangements could fundamentally transform job and livelihood prospects for the poor’. Karishma Busgeeth, manager for monitoring, evaluation and knowledge management at the Housing Development Agency (HDA) says that transformation is ongoing at different rates in different forms.

“There are however excellent pockets of transformation.”

The HDA is a national public-sector development agency that acquires and prepares land as well as develops the land and project manages the development of housing and human settlements, shares Schaefer’s perspective.

Over the years, various cities have worked around creating an integrated city providing access to different class groups and injecting diversity in and around the area. Trafalgar Property Group MD, Andrew Schaefer says that there has been some progress in city transformation linked to demographic of tenants.

“In Johannesburg we see increased clusters of foreign Africans living in clusters, living as a community.” He expresses that there’s also been a fair amount of building developments, conversions and refurbishments, “to try and improve conditions of buildings thus making residential accommodation available which taps into the demand for accommodation in the cities, a well-located area.”

“The most significant public-sector investments have been in low-income housing, public transport infrastructure, and bulk infrastructure for basic services provision, as well as improved access to health and education,” shares Busgeeth.

Over the years, various cities have worked around creating an integrated city providing access to different class groups and injecting diversity in and around the area. 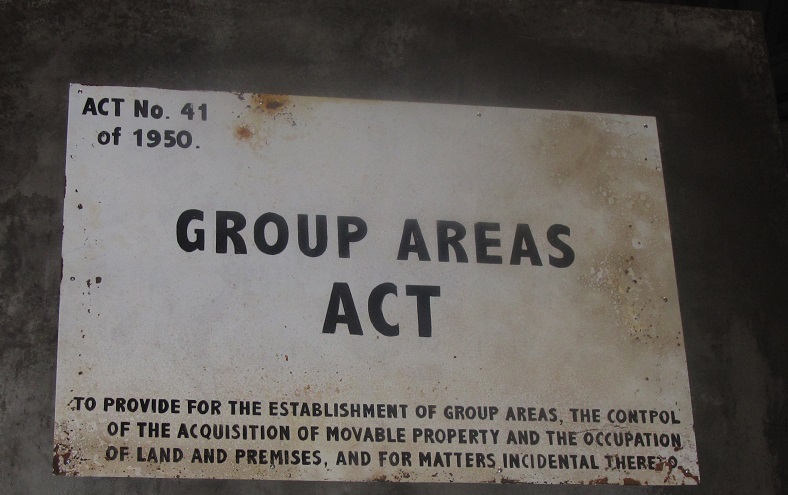 The Group Areas Act of 1950 contributed to social and economic segregation. Image: shouldbetold

A 2016 report released by South African Cities Network says that one of the challenges municipalities face with addressing the problem is securing land. “They are required to drive the spatial transformation of South Africa’s urban areas but have difficulty accessing well-located land for development that will provide residential and other opportunities to the poor.”

According to Busgeeth, the agency has monitored and evaluated a sample of 10 human settlements projects where the scale, nature and appearance of these communities has visibly changed. “For many people, life in the city has improved and modernised, many who were previously denied full citizenship rights now have access to basic services, shelter and city resources,” she adds.

Securing land in urban areas is scarce and when such a piece of land is located tensions around it drawing profits and servicing the lower income group arise. This constrains the city’s ability to cross-subsidise. “For the state (and local government), these implications relate to service delivery, the ability to deliver on spatial transformation goals and fiscal viability,” Busgeeth says.

She explains that costs of service delivery are higher in sprawling urban environments as they have to be provided over long distances where low-income housing has been built.

‘In many municipalities, state-owned entities (SOEs) own well-located land parcels, however, their insistence on market prices, bureaucracy and ongoing delays hamper the process of acquiring the land,’ says South African Cities Network.

As a property group that works often with government, other constraints that Schaefer names includes availability of affordable buildings to develop.

“Municipal charges in the city are relatively high.” This has a knock-on effect on tenants seeking affordable housing. Schaefer says that discussions with council are being held around the state providing state or cross subsidisation to discount municipal rates in the inner city so that it is affordable overall.

“Charges don’t differentiate according to area. For example, places like Rosebank pay the same charges as the Joburg CBD. Transformation is limited by volume and affordability,” he laments. Connected to that is municipality’s inability to provide on-time billing, “And to provide support around such queries,” shares Schaefer.

The introduction of social housing has played a significant role in addressing the housing backlog and towards addressing transformation. However, Schaefer says that these institutions have limited capacity to apply for subsidy to deliver housing.

Challenges will always be present when seeking to right wrongs of the past. However, efforts by government to work with the private sectors to deal with the challenges are gaining traction. This is seen through the City of Johannesburg’s efforts to rehabilitate bad buildings by releasing them to the private sector for conversion into low-cost housing and small, medium and micro-enterprise opportunities.

“There is no question that millions will have to be spent to develop the Aerotropolis (City of Ekurhuleni) economy. The key is to devise a bankable strategy that involves the public-private sector. We have to create conditions that attract investment and funding of development,” says Mzwandile Masina, executive mayor of Ekurhuleni Metropolitan Municipality.

“They are trying to unlock the potential in these buildings and further promote transformation of housing availability. It’s an interesting trend that is being watched across the country,” Schaefer says.

The private sector has a track record of cost effectiveness and efficient delivery partnering with them unlocks additional capacity and skills. “It is important to revitalise and invest in areas where people already live, so that there is socio-economic opportunity in multiple areas as opposed to people having to travel to one prime urban district,” Busgeeth says.

With spatial transformation projects and plans rolled out throughout the country, a bulk of the plan and budget allocation is for transport infrastructure. In 2018, Cabinet approved the Integrated Rapid Public Transport Network (IRPTN) policy to be rolled out in major cities in South Africa. The policy involved a major restricting of public transport, with new infrastructure, vehicles, electronic ticketing and improved security. Johannesburg’s Rea Vaya system, Cape Town’s MyCiTi system and Go! Durban are examples of the IRPTN policy.

“There’s been plenty of progress on the transport side,” adds Schaefer.

Addressing job creation, unemployment, skills development, improving conditions of health and public facilities were also part of the plan. The problem with this kind of approach is that, “Government neglected the inclusion of the minibus taxi industry. There is lack of investment in infrastructure for pedestrians and other non-motorised transport users,” expresses Busgeeth.

‘A connected city is assumed to be more competitive and attractive to businesses and residents,” expresses South African Cities Network.

Transformation is seen (and is working) is certain areas and not in others. Busgeeth uses Alexandra as an example. “It is a well-located township that hasn’t translated into improved livelihood prospects for residents. Being located next to the Sandton economic hub has done little for Alexandra residents’ power to change, influence or participate in the city. Unemployment and under-employment, as well as poor infrastructure, facilities and services, all contribute towards sustaining depressed conditions with relatively few opportunities and limited access to resources.”

Apartheid spatial planning is up to government to correct, involving the private sector is one way to address it. South African Cities Network, through their research of cities that are dealing with the issue notes that community participation and consultation is important to tackle the issue. “This will further bring about behavioural change and acknowledgement of role of the programme in bringing about improved mobility and social inclusivity in the city,” it says.