The Transaction Support Centre has been open for just over a year. In the beginning, the TSC team at the Desmond Tutu Sports and Recreation Centre in Makahaza, Khayelitsha, Cape Town, met with local community groups, the local councillor, estate agents, conveyancers and residents themselves, to explain the services they offered: assisting buyers and sellers transact formally, and ensuring that property owners can realise the asset value of their housing by legally owning their claim with a title deed.  It has been difficult but rewarding and they are starting to gain traction and see some successes. 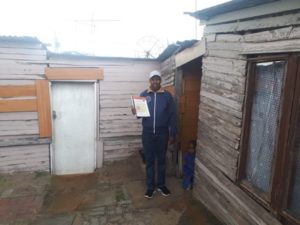 As at 17 September 2019, the TSC has facilitated seven title deed handovers and has another five transfers currently lodged in the Deeds Office. The process to regularise title and hand over a title deed to the rightful property owner is complex, time consuming and expensive. It takes months and depends on the active participation of so many of our partners: officials at the City of Cape Town and the Western Cape Department of Human Settlements, lenders, our conveying partners Norton Rose Fulbright and Abrahams & Gross, and others. We are therefore delighted to report that the TSC was able to regularise four informal cash sales, provide the first transfer on a property for three properties, and facilitate two intestate transfers and one donation transfer.

This is the third of five stories of TSC’s clients who are now the proud, legal owners of their properties:

In November 2018, Mr Gaqavu approached the TSC for assistance with accessing his title deed, having lived in Khayelitsha without title for almost 28 years. He first moved onto his plot in 1992 and in 2017 signed a site & service agreement with the City of Cape Town to transfer the property into his name. He also brought with him a letter from the City of Cape Town confirming that conveyancers had been instructed to proceed with his transfer that same year. With this information the Transaction Support Centre followed up with relevant City officials and the conveyancing firm concerned to understand the reason for the delay in transfer and to offer our assistance to expedite the process. After several months of follow-up, we received confirmation that the transfer was lodged in the Deeds Office in May 2019 and on 23 August 2019 the Transaction Support Centre handed Mr Gaqavu his title deed.

Having finally received title to his property, Mr Gaqavu now hopes to access a building subsidy to complete a top structure on his plot.