Forty elderly residents were handed historical title deeds on 16 September 2019, at a ceremony held at the Athlone Stadium. This means full and unambiguous ownership to these residents, some of whom have waited for over 20 years to receive their title deeds. 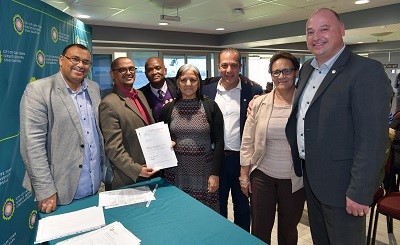 The 40 beneficiaries are from Wallacedene, Langa, Atlantis, Joe Slovo, Kleinvlei, Wesbank and Mfuleni. Empowering residents who were previously denied access to property ownership is one of the City’s key priority areas to bring about redress.

‘The handing over of title deeds allows homeowners to live in dignity in a home that they can call their own. It is an investment that will grow in value that becomes an asset for the homeowners and their loved ones. There is no greater pride than taking care of a house that you can call your own and turning it into a home,’ said the City’s Mayoral Committee member for Urban Management, Alderman Twigg.

The oldest recipient, 79-year-old Paul Oostenhuizen, from Beacon Valley in Mitchells Plain, was proud to receive his title deed yesterday.

The issue of housing and the well-being of senior citizens is of utmost importance.

Today, many families still live as tenants or without ownership rights in houses they have lived in for generations. Handing over title deeds is a way in which the City is able to rectify the injustices of the past.

‘Service delivery is about improving the lives of people and adding value to their lives. It is part of the City’s commitment to building a caring city.

‘Owning a home for many residents is something that they only dreamed of. We are pleased to be part of turning the dream into a reality. The formal handover of title deeds is a remarkable event that transforms lives and empowers residents,’ said Alderman Twigg.