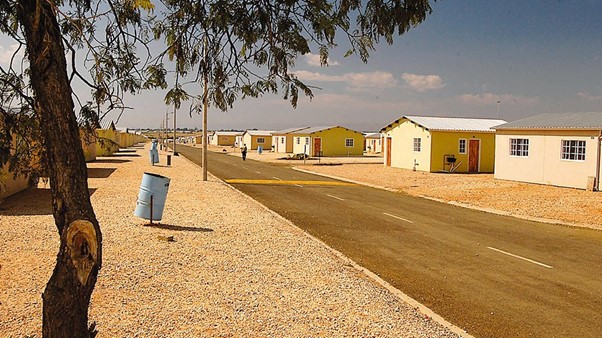 This is the first tranche of 150 full title deeds entirely funded by Remgro Limited. It is also the first physical presentation to take place since the Covid-19 National Disaster was declared and the original date had to be postponed. The ceremony was held at the Kathy Johnson Hall, Clanwilliam, in the North of the Western Cape.

That the new homeowners have finally received their title deeds was made possible due to the committed and collaborative work of the Cederberg Municipality team, led by Executive Mayor Ms Sylvia Quinta, Human Settlements Department’s Ms Shirley-Ann Mouton, and the dedication of the FMF Khaya Lam team.

The Cancellation of Bonds issue is a major obstacle in delivering full freehold title. FMF President Leon Louw said, “This is a truly historic moment. It is the first of our apartheid era bond cancellations. In the 1980s, the FMF worked on a compromise with the PW Botha regime to introduce, for the first time in a century, tradable security of tenure in ‘locations,’ ‘settlements’ and ‘townships’ in historically white group areas.

“The government agreed to permanent tenure but would not go all the way to simply convert all ‘apartheid’ land to clean freehold title at no cost to beneficiaries. PW Botha insisted that there had to be a payment and that the title had to be called ‘leasehold.’

“Now, 50 years later, long after people have paid off their bonds, they find they are still trapped in a kind of house arrest whereby they are not free to trade, let, mortgage or develop their land.

“With the wonderful support of the Council, Remgro, and conveyancer, Dirk Verdoes, we have been able to register our first bond cancellations, thereby releasing people from the shackles and cost of getting antiquated bonds cancelled. People who arrived here today burdened with bonds will leave liberated from them.”

Remgro CEO, Jannie Durand said, “Remgro is serious about inclusivity, which includes the right to share in the benefits of owning the title deed to your property.”

Shirley-Ann Mouton said, “Residents need to get their title deeds as home-owners. With FMF support, we are now able to hand out 45 title deeds in the Clanwilliam area. All events will be ‘socially distanced’, but we feel that residents must have their title deeds as soon as possible. They have waited long enough. The clear message today is that we conquer for ordinary people to benefit. This is the start of a beautiful and prosperous partnership.” The Municipality provided transport, lunch, and food parcels to beneficiaries.

For over 40 years, the FMF has championed the cause of converting the various forms of Apartheid title found in the townships to full, unambiguous ownership for the current tenants. Title deeds make a tangible difference to the lives of ordinary South Africans, especially the poorest people living in the Western Cape. The joint aim is to bring about true economic and social transformation through property ownership. When the residents enter the hall, they enter as tenants. When they walk out, they are homeowners in possession of fully tradeable freehold tenure, taking their first step towards real economic empowerment.

This emotional event was opened by Municipality Speaker Mr Paul Strauss and Municipal Manager Mr Henry Slimmert gave the vote of thanks.