Forty families will soon have new homes now that construction has begun on a series of RDP homes paid for by the sale of the mayoral mansion in Pretoria, which was sold last week. 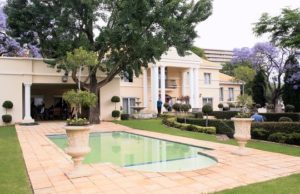 The mansion, which current mayor Solly Msimanga describes as, “a costly single mansion with little to no benefit for Tshwane residents,” was sold after analysis showed that the R12-million spent on attempting to restore it by the previous regime had been largely wasted.

“Given the market value of the property, it is unlikely that we will recoup all the money wasted on exorbitant renovations,” he said at the time.

The home was knocked down at auction for R5.1-million, and the money has been put to use developing 40 RDP homes in Atteridgeville. Families were encouraged to take part in the building of their own homes to give them a sense of ownership over the final product.

Msimanga added that the site, in extension 19, had been abuzz with activity since the house was auctioned off.

Alternative methods, which were “environmentally friendly, durable, easy to maintain and aesthetically pleasing,” were to be used for the construction of the 40 houses.

While Msimanga did caution that selling off of metro property was not set to become the norm, he did add that he was delighted with the final result that sees 40 families housed from the sale of one house.

“I am pleased that we will soon be handing over the finished houses and issuing title deeds so that recipients have legal ownership of their homes,” says Msimanga.