Moves afoot to rein in the ‘construction mafia’

Moves are afoot to rein in the disruption of construction sites by the so-called ‘construction mafia’ or business forums through the use of the Prevention of Organised Crime Act (Poca). 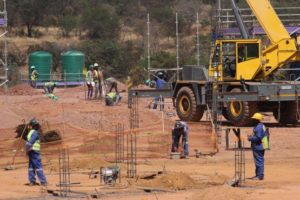 Next up is a meeting between the NPA and the National Police Commissioner that has been postponed five times so far because of the latter’s schedule. Image credit: Moneyweb

SA Forum of Civil Engineering Contractors (Safcec) CEO Webster Mfebe said this week that he led a delegation to a meeting with the National Prosecuting Authority (NPA) in October last year, during which the NPA agreed that the disruption of construction sites should not be dealt with as just a common criminal act but in terms of Poca.

The meeting followed Safcec in March last year sending an SOS to government and demanding urgent intervention at the highest level, to halt a series of attacks on construction projects by AK-47-wielding thugs who are part of the ‘construction mafia’.

Mfebe says at the time that these gangs had by then disrupted and halted at least 78 projects worth a minimum of R25.5-billion. A chorus of related bodies – including the Association of SA Quantity Surveyors, the SA Council for the Project and Construction Management Professions and the SA Institution of Civil Engineering – subsequently added their voices to those with growing concerns over these forums’ activities.

These illegal site disruptions caused listed construction and engineering group Aveng and European-based Strabag International to withdraw from an SA National Roads Agency (Sanral) project that forms part of the N2 Wild Coast Road Construction project, over fears for the safety of their employees.

Armed gangs in March last year also halted construction on the R2.4-billion German oil storage investment project being built in Saldanha by JSE-listed construction group WBHO. Mfebe says the meeting with the NPA was a Safcec-driven initiative but that Safcec realised it was not an island and that the issue affected the overall construction industry. It therefore invited other players, including the SA Forum for Engineering, to participate.

He says that while the invitation had extended to them, some companies affected by the disruption had declined – for fear of victimisation and retribution. Mfebe describes it as “a very fruitful meeting indeed”, adding that it was attended by the heads of various NPA divisions such as the Asset Forfeiture and Anti-Gang units.

What is still outstanding is a meeting with National Police Commissioner Khehla John Sitole to conclude the synergistic approach between the NPA, the Hawks and the SA Police Service. Mfebe says a meeting between the NPA and Sitole was arranged but has been postponed five times to date because of Sitole’s schedule.

Mfebe said he had engaged with Ffret, which had been “very reasonable since they have organised themselves into that structure”.

“It’s only sporadic incidents of certain of their members, which is not encouraged by the overall structure, and also some splinter groups that appeared in opposition of Ffret that embarked on violent protests,” he says. “I think the strategy of direct engagement with Ffret is paying dividends and so far, I’ve not heard of any serious incident that has taken place.”

Mfebe adds that Ffret has distanced itself from serious incidents that have taken place, as at the Saldanha oil storage project, and that Safcec had relied on Ffret to intervene to quell the ‘high temperature’ in Hammarsdale (the Sanral interchange project near Cato Ridge that was brought to a halt last year).

“That is proof enough that Ffret has re-engineered, reorganised and repurposed itself as a positive player fighting for their rights to being included in the mainstream economy as far as the construction sector is concerned,” he says.