Previously owned by the Bank of Mozambique and having been abandoned, Cape York had been hijacked and fraudulently sold, with several ‘owners’ allowing it to become severely overcrowded and collecting rent illegally. It was infamous as a hub for drug trafficking and prostitution, lacked running water, power and sanitation and had seen two fires that claimed lives.

From hijacked to hope 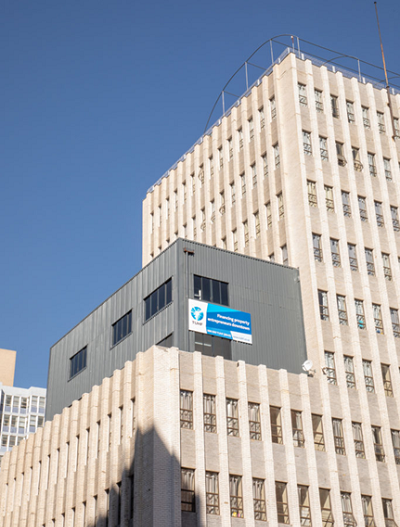 Hijacked buildings like this have become all too common in South Africa’s inner cities. These high-rises have not only become dangerous to live in, but pose a threat to neighbouring buildings, impacting social safety as a whole.

Cape York, situated in Doornfontein on the corner of Nugget and Rahima Moosa Street, epitomised the negative impact of hijacked buildings on neighbourhoods and society. Originally a 10-storey office building with retail shops on the ground floor, employees who worked in the building started living there in 1997. As the building became more neglected, more people moved in, leading to severe overcrowding.

To compound this issue, the building was fraudulently sold to a group of investors – a discovery the appointed attorneys made during the transfer process. Once this was legally rectified, Samuel Beyin saw potential in the embattled building and bought out the shareholding of the Cape York owned entity.

Despite calls to simply demolish the then-derelict building after a second fire claimed seven lives in 2017, Samuel was determined to realise the building’s potential and transform it into a viable and safe rental property. He renamed the building Focus 1 and invested his own capital before approaching TUHF for a loan. The total cost of the project including refurbishment was close to R100 million.

“Focus 1 represents the very essence of what TUHF aims to achieve by investing in inner-city property refurbishments – seeing and realising the potential in run-down buildings and declining areas to transform them into safe, secure environments for people to live and thrive,” said Nano Makwela, Portfolio Manager at TUHF.

The Focus 1 project took a property entrepreneur with courage and conviction to realise its potential. TUHF was thrilled to partner with Samuel’s passion and drive to help bring his vision to life.

The project presented many design, technical and construction challenges. But Samuel and TUHF focused on the opportunities to collaborate and resolve these creatively. The expected completion date was March 2020 but – because the finished building would provide student accommodation for up to 538 young people – Samuel and his team pushed through over the festive season to achieve practical completion on 28 January, well ahead of programme and in time for the new year.

Makwela said: “Even though Samuel’s previous experience was mainly in commercial property, his entrepreneurial drive to implement creative solutions and an understanding of what students want from accommodation has led to the success of this project. Focus 1 proves that affordable accommodation doesn’t have to feel cramped or meet low-cost standards to be profitable.”

The refurbished building consists of spacious two-bed and four-bed unit apartments as student accommodation offering, and communal study and social areas on the 5th floor. Each apartment is leased fully furnished, incorporating beds, cupboards and clever additional storage solutions under the beds that may be used to store textbooks and other study paraphernalia, as well as private bathrooms with a toilet and shower, a small kitchenette with a sink and eating area.

The building has full communal kitchens, with microwaves and stoves where students can prepare meals, as well as social areas to allow tenants a safe and comfortable space to interact and relax. Wi-Fi, laundry facilities, an in-house gym, a library, football and basketball fields, state-of-the art biometric access to ensure safety and transport to and from campus complete the list of amenities that make Focus 1 such a sought-after home for students.

The surrounding universities were then invited to view the building in January 2020 and at the time they immediately started referring students to take up tenancy. While tenanting, the building was temporarily affected by the impacts of the Coronavirus pandemic and the national lockdown and physical distancing measures to support containing the spread of the virus, tenancy is expected to pick up once onsite classes and attendance at the surrounding universities is allowed to resume. In addition, the innovative building design is future-proofed and constructed in such a way that it allows for fluent conversion. Should the market change, Focus 1 can easily be converted to normal apartments for rental stock, should the owner decide.

Cape York’s past was brutal and terrifying. It once stood as a symbol of the city’s growing urban decay.

“But now, Focus 1 manifests TUHF’s belief that by the action of extraordinary entrepreneurs the future is indeed urban. This project demonstrates TUHF’s unrivalled ability to catalyse growth and urban regeneration not only through funding but, more importantly, through our ability to innovate,” concluded Makwela.

Samuel Beyin is already looking at further opportunities with TUHF and intends to pursue additional projects like this as soon as possible after the Covid-19 pandemic subsides.