Refined spatial vision for District Six in the making

A refined spatial vision for District Six is in the making with residents being the focal point of the process. This collaboration between the City of Cape Town and representatives from the District Six community, other residents, stakeholders and interested parties was on exhibition at the City Hall from 9 to 11 December 2021. 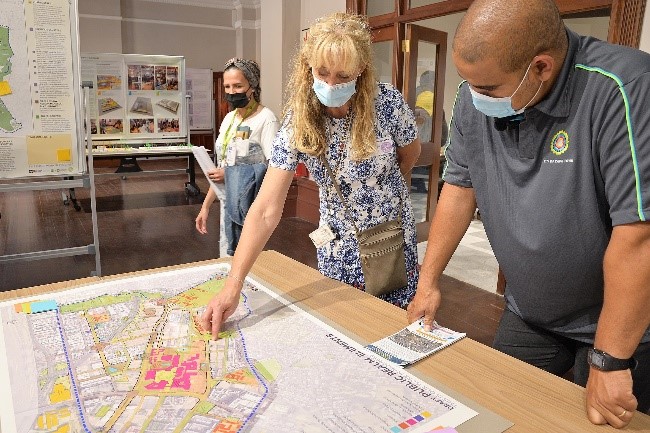 Many residents attended the first day of the exhibition at the City Hall where the public can view the work done to date, in collaboration with District Six Caretakers, on the Public Realm Study for District Six. Alderman Eddie Andrews, the City’s Deputy Mayor and Mayoral Committee Member for Spatial Planning and Environment, also attended the first day of the Open House. 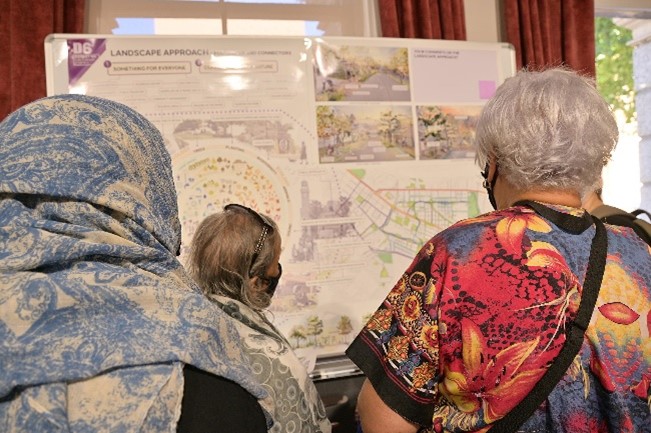 The City’s Deputy Mayor and Mayoral Committee Member for Spatial Planning and Environment, Alderman Eddie Andrews, visited the exhibition at City Hall where the public can view the work done to date, in collaboration with District Six Caretakers, on the Public Realm Study for District Six. Liezel Kruger-Fountain, an official from the City’s Urban Planning and Design Department explained how the work will tie in with the draft local neighbourhood plan for the area. 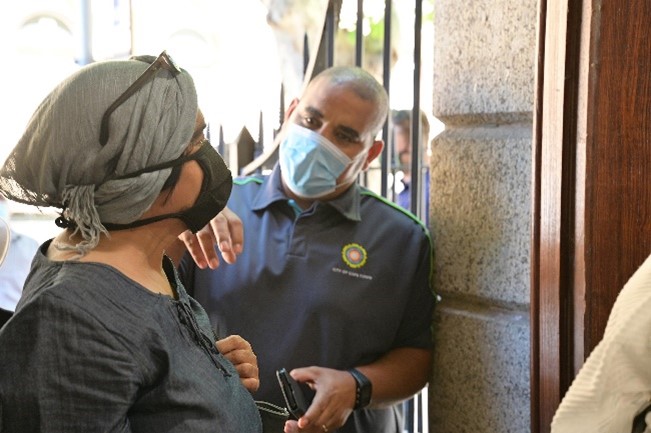 The City’s Deputy Mayor and Mayoral Committee Member for Spatial Planning and Environment, Alderman Eddie Andrews, visited the exhibition at City Hall where the public can view the work done to date, in collaboration with District Six Caretakers, on the Public Realm Study for District Six. He met and spoke to some of the residents who attend the exhibition this afternoon, 9 December 2021.

In March 2020, the City, together with residents and interested parties, embarked on a journey to refine the overall spatial vision or Local Spatial Development Framework (LSDF) for District Six.

To further support and inform the draft LSDF, the City undertook a Water Study and Public Realm Study where the City has been facilitating a process for collaboration about the public realm with the assistance of consultants. The collaboration has been happening over the past few months with nominated representatives from the District Six community working with design experts in reimagining and visualising what the public open spaces, places and streets in District Six could and should look like to create an inclusive vibrant community and a sense of place and belonging.

The collaboration is facilitated through six co-design workshops, four of which have taken place since September 2021. It is the work that emanated from these four workshops – maps, models, and drawings – that is currently on display at City Hall for public viewing and comment.

‘Earlier today I visited the City Hall where I met and talked to many of the residents who collaborated with us on this process. I must say I am astounded by the creativity and quality of the work on display, and the passion that has gone into it. The maps and designs tell the stories of where and how the people of District Six lived and socialised before the forceful removals took place. All of these evoke memories of the past.

‘It again reminded me that bringing life back to District Six is part of our journey to return what was lost, to recompense for the injury inflicted, and to restore the dignity of those who once called District Six their home. It is as much about memory as it is about healing and a great deal of this is happening in the public open spaces.

‘I am urging residents to attend the exhibition and see how participants mapped their lived experience of District Six and what the future of a new District Six could look like. For me this exhibition also illustrates what is possible when the City works hand-in-hand with communities, taking guidance from our residents.

‘On this note, I want to add that there is still time left for those who want to participate in refining the spatial vision for the public spaces and streets in this area. We have another two co-design workshops next year, and the public will have the opportunity to comment on the outcomes of these workshops.

‘Residents can also still comment on the draft LSDF until 15 December 2021 that looks at the overall vision for the neighbourhood and draws from the draft 2012 Development Framework, which was developed together with the claimant community. Once finalised, the Public Realm Study and Water Study will inform the draft LSDF or neighbourhood plan. The more people we can involve, the better the outcome will be, because it is along our streets, and in our parks, open spaces and places between buildings where communities form over time,’ said the City’s Deputy Mayor and Mayoral Committee Member for Spatial Planning and Environment, Alderman Eddie Andrews.

To date, the four public realm co-design workshops have focused on the culture, memories and activities of the former District Six; the location of public open spaces and how these could be organised to connect people, and surrounding neighbourhoods; and the principles we want to apply when designing public open spaces to form a new sense of identity, place making, and diversity.

The Water Study is being undertaken to better understand where existing underground and surface water resources are located, and how the water can be used in a sustainable manner in re-establishing the community of District Six going forward. The study will be concluded by mid-2022, if all goes as planned.

The Public Realm Study is an in-depth analysis, with the representatives of the community and stakeholders in the area, of all the public spaces and places in and related to District Six. The link to the content produced to date is as follows: https://www.capetown.gov.za/work%20and%20business/planning-portal/Spatial-Plans-and-Frameworks/district-six-neighbourhood-plan

The draft Local Spatial Development Framework (LSDF) for District Six is currently available for public participation and comment until 15 December 2021. It is available on the City’s website at www.capetown.gov.za/haveyoursay.

The LSDF and related Public Realm Study are aspects that the City can implement. They are separate from, but will enhance the housing project of the National Department of Agriculture, Land Reform and Rural Development that is currently under way as part of the restitution process.