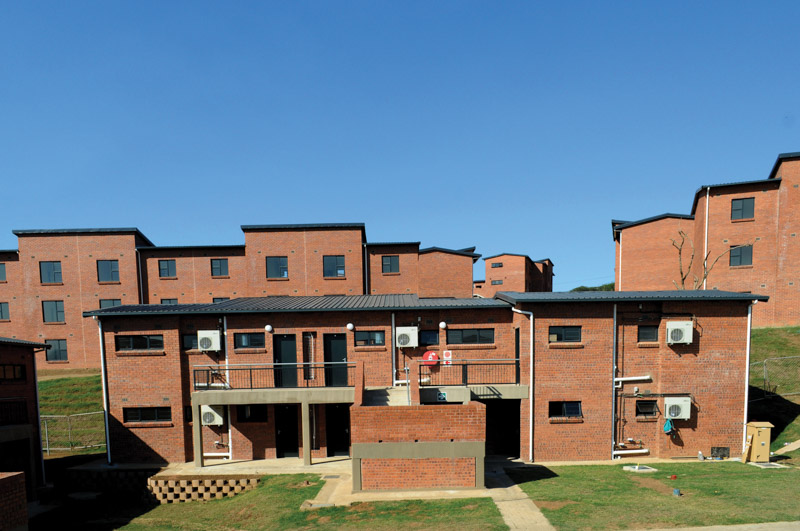 Social housing units must be self-contained, which means that each unit must contain sleeping quarters, living/dining/kitchen areas, and ablutions. Photo by SHRA

The Social Housing Act, 2008 (Act No 16 of 2008) defines social housing as: ‘A rental or co-operative housing option for low to medium income households at a level of scale and built form which requires institutionalised management, and which is provided by social housing institutions or other delivery agents in approved projects in designated restructuring zones, with the benefit of public funding.’ (Social Housing Act, 2008, p8 – b)

The Social Housing Act governs the implementation, funding, and regulation of social housing in South Africa. As a policy instrument, the primary purposes of social housing are urban restructuring and regeneration and increasing the supply of rental housing in good locations for low- to moderate-income earners.

In addition to residential accommodation, social housing estates can incorporate other facilities and services. These provide community development incentives and empowerment benefits and promote a lifestyle conducive to community cohesion.

“Social housing is delivered under the jurisdiction of the SHRA and must be developed within restructuring zones.”

Social housing is delivered under the jurisdiction of the SHRA and must be developed within restructuring zones. The SHRA is a juristic person whose core functions are to regulate SHIs and projects, and to invest in capital projects and institutional development.

A government grant enables access to the housing stock provided by low-income households. The focus is on funding projects rather than units, which allows for a holistic approach to lifecycle costing and long-term perspective required for social housing projects. Public sector funding for social housing comprises three components:

Funding for SHIs through the Institutional Investment Grant (IIG).

Funding for the operations of the SHRA, which is mandated to oversee the social housing sector.

A total of R4.3-billion has been allocated for social housing over the five-year MTEF period. This is expected to deliver 30 000 social housing units.

The CCG of R723.706-million is only 2.2% of the human settlement’s capital budget for the 2019/20 year (the budget is R32 752-billion). Of this, 57% (R18.779-billion) was allocated to the human settlement development grant (HSDG) and 37% (R12.045-billion) to the urban settlement development grant (USDG). The SHRA is currently motivating for an increase in its allocation, as it believes the current allocation is insufficient for 30 000 units. The current Social Housing Act and Regulations do not allow the SHRA to borrow or leverage its current capital allocation.

Since 2005, 135 projects were delivered through the Social Housing Programme, providing 33 241 units. A further 38 projects are in progress, which will bring the number of projects to 173, providing 52 683 units.

Social housing units must be self-contained, which means that each unit must contain sleeping quarters, living/dining/kitchen areas, and ablutions. No rooms with communal ablutions or other facilities are funded.

Units must be a minimum of 30m², but the SHRA is looking to become more demand responsive. To this end, draft norms and standards were developed during2020.