Corobrik is making steady progress in the construction of its new factory, which will be the largest and most environmentally-friendly brick factory in Africa. 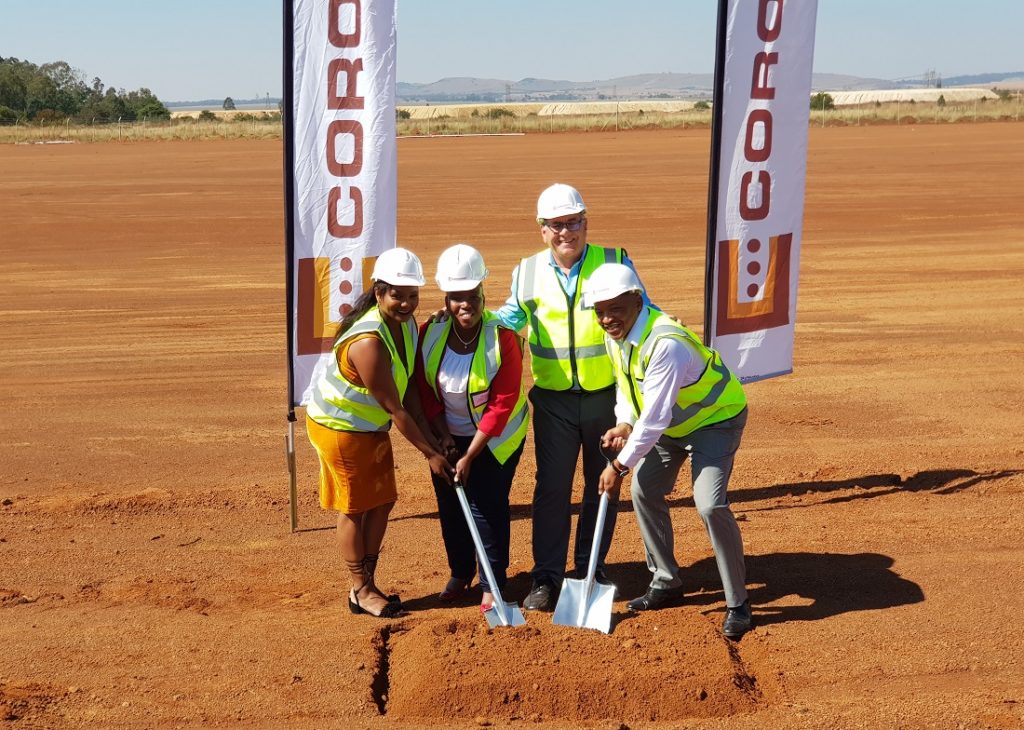 Digging in are, from left: Lerato Mokgotsi and Rehab Mathobela, recently elected Corobrik directors; Peter du Trevou, Corobrik
chairman; and Bryan Soldaat, director: Resources Based Industries for the Department of Trade and Industry.

Speaking at the sod-turning ceremony of the new factory, chief executive of Corobrik Dirk Meyer welcomed all guests and said, “Corobrik is a proudly South African company and from humble beginnings more than 100 years ago, the company has grown into one of South Africa’s instantly-recognisable brands. As a supplier of quality building materials, Corobrik was born in South Africa, has grown in South Africa, and is world-class in every way.”

Corobrik is confident in South Africa and believes that its mission is to build a better South Africa. Its products are used all over the country and provide quality, durable and safe shelter for the people of the country.

“We are committed to South Africa and believe that it is just a matter of time before the construction sector improves. The construction industry and the associated brick industry has traditionally been – and still is, cyclical. Corobrik has always invested strategically at the bottom of the cycle to be better prepared to reap the rewards of an upturn,” said Meyer.

Meyer continued, “We are investing in this state-of-the-art facility to ensure the relevance and sustainability of Corobrik for another 100 years. The technology to be employed at the new factory is among the best used around the world.”

The new factory will produce 100 million face bricks a year at very competitive costs and these bricks will build more than 7 000 houses a year, that, as a consequence of the multiplying effect, creates a multitude of employment opportunities down the line. In addition, Corobrik strives to consume minimal natural resources and maximise the product of the resources. The factory will be equipped with two gas-powered dryers and kilns that will minimise the factory’s carbon footprint.

The factory roof will be covered with photovoltaic (PV) cells that produce electricity in excess of 1.1 million kilowatt-hours per annum, which feeds directly into the factory. The power generated from the PV system will produce about 15% of the factory’s annual power consumption.

The whole factory site has been profiled to collect any run-off rainwater to be stored accordingly to what is permitted by the Department of Water Affairs and Forestry. The water collected will be used in the process during manufacturing and an on-site effluent plant will process all waste to the most pristine and pure state.

The project has already created more than 200 jobs on site during the construction phase, and on commissioning at least 60 people will be employed at the factory. Corobrik has also invested in the training of 30 members of the community to work on the brick laying of the factory, and existing staff will be trained and up-skilled to operate the new factory.

“This factory will serve both Corobrik as well as South Africa with jobs, environmental integrity, with dignified, quality-built structures with financial rewards for all of our stakeholders,” Meyer concluded. 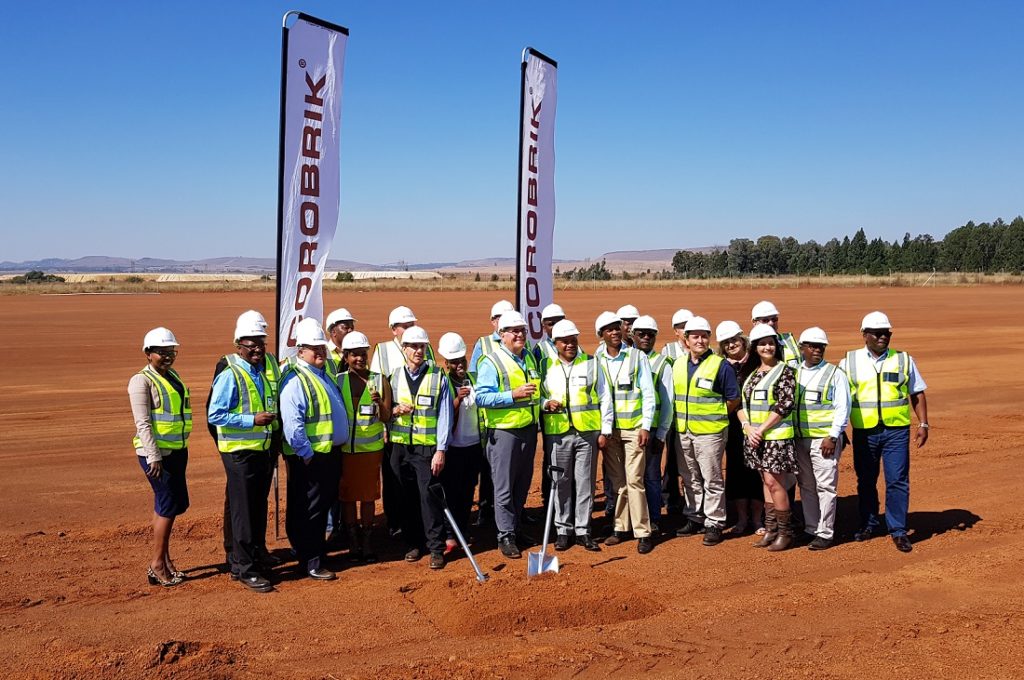 Bryan Soldaat, director: Resources Based Industries for the Department of Trade and Industry, delivered the keynote address, he said, “It is a great pleasure to be a part of this momentous occasion that signifies a milestone in the history of Corobrik as a pioneer in manufacturing and supply of critical material for the construction industry.”

Since its establishment in 1902, and as a household name, Corobrik has grown in leaps and bounds to be a diversified strategic player. The sod-turning ceremony and the R801-million investment solidifies an important partnership built between business and government, and the role that business plays towards achieving the country’s economic and strategic goals.

The manufacturing industry is one of the key priority centres in the Industrial Policy Action Plan (IPAP) according to Soldaat, which is what is referred to as the ‘guidebook’ for the dti and the country. “Through IPAP we have identified and listed the particular sectors that we know as drivers, and the construction industry is one of them. So, in IPAP, construction contributes to play a pivotal role in the creation of employment opportunities. The government’s R855-billion budget for infrastructure expenditure provides a positive incentive for growth in the sale of Corobrik products,” said Soldaat.

President Cyril Ramaphosa recently launched the significant local and international investment programme that will contribute to the growth of the South African economy. Corobrik’s new factory will contribute towards achieving the president’s trillion-rand target.

Soldaat continued, “The new factory will double production of the old factory and boasts state-of-the-art equipment from Germany. This will contribute to the enhancement of our technology competency, and the transfer of critical skills to existing employees. We are very pleased – as the dti – as we understand that the new factory will not displace any employees, but instead will upskill and re-skill existing employees.

“It is encouraging to see such investment and expansion, and the dti is keen to support local supply and enterprise development, as well as empowerment. Thank you to Corobrik for inviting us [the department] today. Our doors are open in terms of being able to walk this path of investment with you and thank you for the jobs that you have already created,” Soldaat concluded.

The ceremony was performed before guests networked over some refreshments and a light lunch.