In South Africa, due to the perpetual shortage of affordable housing, the residential sector is expected to see demand continuing to grow.

This growing demand for housing will however also increase electricity consumption, as the residential sector alone consumes 30% of Eskom’s coal-powered energy. This increase in housing is expected to further double in the coming decade posing stress on the already burdened electricity grid.

South Africa’s energy security is crucial to our long-term growth ambitions, but load shedding has continued to slow the economy and the need to increase our energy supply has been a constraint on growth for over a decade. Eskom continues to record declining energy availability factors (the amount of energy available compared to the total energy generation) and are well below the 80% target. The power utility has been plagued by operational issues even at its most reliable plants. Since January, this year, South Africa has had over 38 days of load shedding. This has occurred outside of the peak electricity demand winter months. A major concern is the unplanned outages linked to the lack of proper long-term maintenance, ageing power stations and the lack of new build power stations to replace decommissioned ones.

There remains a risk of load shedding for the next 18 months.

This often frustrates homeowners, who must deal with spoilt food and damaged appliances due to power surges caused by load shedding. Adding to this burden are increasing electricity prices, which have increased almost three folds in the last decade and are expected to continue to increase by more than 15% this year.

Water supply too is a perennial with aging infrastructure and equipment. Pumps burn out and pipes burst randomly, resulting in some suburbs being without this precious resource for days.

Homeowners are becoming more conscious about the importance of having these essentials and are shifting towards greener solutions and starting to live more sustainably. This includes taking actions to reduce food waste, recycle and conserve water, save energy and opting to invest in energy solutions that are seen as kinder to the environment, reducing their carbon footprint and increase their resilience.

Furthermore, with climate change now firmly on the global agenda, the topic of energy efficiency and sustainability is becoming a top of mind for homeowners, as it reduces the total cost of ownership in the long term. The interest in green buildings continue to grow, aiding efforts to improve quality of life and sustainability.

Outlined below are few steps that could help you move towards a more sustainable lifestyle and maintain healthy finances by reducing electricity bills, and therefore, your budgets, sensibly.

Replacing incandescent and halogen lightbulbs with energy-efficient products such as LED lightbulbs.

Installing water systems that collect rain and grey water, which can be used in gardens and for washing the car and paving areas.

Installing a timer on the electric geyser.

Replacing the electric geyser with a solar geyser.

In recent years, renewable energy technologies – such as biomass, biofuels, hydro, and wind power have evolved at an incredible rate.

It is important to note that renewable energy technologies are no longer an expensive source of energy generation. For example, solar panel prices decrease rapidly in recent years and therefore the cost of photovoltaic installations are becoming increasingly viable.

According to Bloomberg New Energy Finance, Solar Photovoltaic (PV) prices have decreased by over 150 times over the last 40 years, with installations increasing 115 000 times. Decreasing costs of solar panels (as well as the increasing costs of traditional sources of Energy) has had a positive impact on the investment case for Solar PV installations.

Solar Photovoltaic (PV) systems are one of the most used renewable energy technologies. This is largely due to their cost-effectiveness and the abundance of sunlight, especially in South Africa. 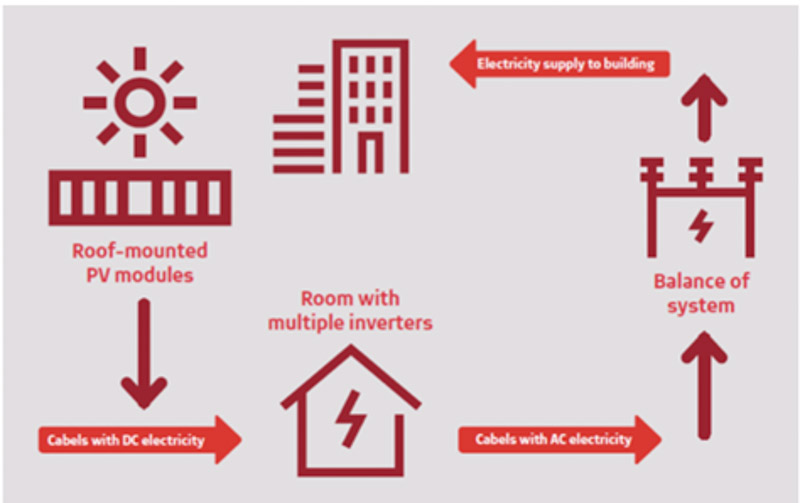 Solar PV panels convert solar radiation (sunlight) into electricity. The more sunlight the PV panel is exposed to, the more current it generates. Maximising exposure will also maximise the amount of electricity it generates in the form of direct current (DC) electricity, which is not compatible with the electricity found in many homes or offices. 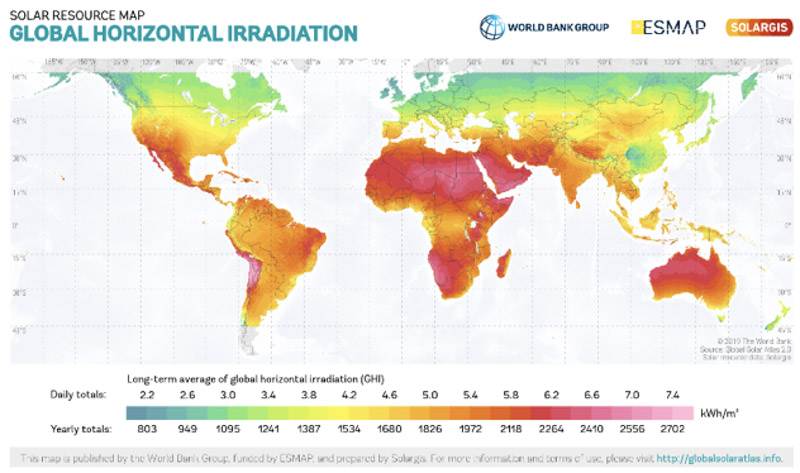 Solar PV systems use solar radiation to generate electricity. Africa has an abundance of solar resources – even the cloudier regions are more suitable for PV than the best regions in some of the leading countries for PV, such as Germany and Japan.

The above map indicates the available solar resources across the globe for one year. You will note much stronger red colour across Africa compared to most other continents. This means we receive higher levels of sunlight per square meter than many other parts of the globe. While many countries require subsidies to make solar viable, our subsidy comes through the abundance of solar radiation we receive.

Financial considerations for your business and household when investing in Solar PV.

The price of PV systems has declined significantly in the last decade. Despite this reduction, the initial capital costs of PV systems are relatively high when compared to non-renewable energy sources, such as diesel generators. However, unlike non-renewable energy sources, PV has no fuel costs and low operation and maintenance costs. It should therefore be considered as a long-term investment.

Solar PV’s financial feasibility is calculated through the offsetting of the electricity consumed from the local network, which results in a reduced electricity bill. If you compare these cost savings against the cost of repaying a loan, there is often a strong case for solar if finance is structured correctly.

Higher electricity prices have also resulted in a more feasible financial model for a PV system. Larger PV systems offer lower energy costs over the PV system’s lifespan when compared to smaller systems, due to the lower installation costs.

Lifespan and costs of Solar PV

Most solar PV panels on the market today come with a warranty of 25 years, meaning that the power output will not be below 80% of the rated power until after 25 years of service. Other components, such as the inverters, must be replaced after every 10 years of service – an important cost to consider.

Solar PV systems can operate as stand-alone units or be tied to the local electricity network.

The business case for lithium-ion batteries improves as prices continue to decline at a rapid rate (see graph below), enabling a solution for countries that are facing electricity-related challenges, including variable renewable energy generation on their power systems, load-shedding and steep increases in electricity costs.

How BESS is used:

When thinking about your household’s future energy mix, solar PV is likely to be the most viable option. Given the reducing costs of technology, increasing energy costs, our abundant sunlight, and the long lifespan of the technology the business case is increasingly attractive. Solar PV is therefore a key enabler to ensuring affordable, reliable, and sustainable energy for all. This is particularly important for affordable housing where utility cost increases create affordability cost challenges.

“The value of energy, as with any commodity, is inherently linked to demand.”