The winner of the 2021 Corobrik Student Architecture Awards was announced on Wednesday 8 June at a special event at the Radisson RED in Rosebank, Johannesburg.

The 35th national awards ceremony was unique in that all seven regional winners and the heads of school from their respective universities, together with leaders from the architectural fraternity, were in attendance in person for the first time since the Covid-19 pandemic.

The 2021 national winner, announced live, was Mpho Sephelane from the School of Architecture at the University of Cape Town, who received a R70 000 cash prize. A special prize for the best use of clay face brick in a project was awarded to Wian Jordaan from the Department of Architecture at the University of Pretoria. An overwhelming four of the seven regional winners used face brick in their projects, including Mpho. However, this is not a criterion to clinch the overall prize.

The thesis by Mpho was entitled ‘Re[covering] Place: African ways of seeing, thinking and making as a call to rethink and remake places in cities’. The judges’ citation stated that Mpho “shifted our mindsets to trust our heritage to guide us and to be truly authentic. She narrated the use of the Basotho blanket as a transformative and imaginative symbol of identity and relevance.” 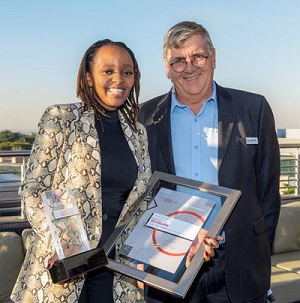 “The opportunity afforded to me has validated a lot of what my fellow students, especially people who connect with their culture, have been struggling with, and that is the issue of translating who they are and what their culture entails and the values they bring to their everyday lives and professions,” said Mpho. “The journey is really a beginning for me as I am excited to continue to collaborate and learn from other cultures about such ideas of translation and preservation.”

The seven regional winners presented their theses to an esteemed panel of judges in a Johannesburg studio during May, from which the final winner was selected. The judges were Ludwig Hansen from Ludwig Hansen Architects + Urban Designers, Rahdia Parker from Archi Cape Town, and Adwoa Agyei, Director: Physical Development Services at the City of Tshwane.

“I can only agree with the sentiment that we as judges were impressed by the quality of the submissions. There are actually seven winners here. It has been an honour from our side to be part of the awards,” said Ludwig.

Adwoa concurred and said the process for the judges had proven “challenging, real, and relevant and it was exciting to see your potential as architects. The work was incredible, beautiful, and communicated really well what you were each trying to get across.”

Rahdia added that the presentations “created interesting conversations. It is something immensely profound to have come through six years of study and now we are selecting seven of the top performing students from institutions all over South Africa and bringing that together for all to share and to contribute to the collective learning of the profession.”

Guest speaker Cliff Gouws, a senior architect and urban designer at Boogertman + Partners, was national winner in 2011 and told guests and finalists there was a definite improvement in the quality of the work being presented every year. “This is because the students have better access to information and guidance, so the universities can be very proud as to what all of these finalists present in terms of good architecture.”

Cliff added a note of thanks to Corobrik for hosting such a prestigious event that upheld a high standard that everyone in the industry could look up to. “What Corobrik is doing for the architectural fraternity is fantastic. The quality of South African architecture is better than what we realise. We have phenomenal architectural practices that do phenomenal work. Our student work competes at an international level.”

Nick Booth, CEO paid tribute to the hard work of the judges and pointed out that Corobrik has no input into the judging process or how the final winner is determined. “Our three esteemed judges have applied their minds at a level of detail that was truly exceptional. It is this consideration that has made these awards so successful over the years. It is largely due to the fact that it is not company driven but is driven by the architectural fraternity itself. These awards are important to the architectural profession, the building industry, and the participating universities as they encourage creativity and innovative approaches to architecture.

“They bring a sustainability to the profession because what we are doing is ensuring that the future of the built environment is in good ethical hands. That is an outstanding vision for your profession. We are immensely proud of the ongoing success of our past finalists and winners. They are scattered across the globe, are all working in major firms, and have been highly successful in their careers,” said Nick.

“We are proud of our overall contribution to the architectural profession,” concluded Nick. Apart from the Corobrik Student Architecture Awards, the company is involved with a number of regional architectural associations through the South African Institute of Architects, of which it has been a patron for the past 40 years.