An energy-efficient home saves money by reducing energy use, providing a higher level of comfort to its occupants and increasing the resale value of the house. SANS standard 10400-XA requires that 50% of energy in new developments since 2010 derives from alternative energy sources.

All new affordable housing developments have to comply with SANS standard 10400-XA – requiring that 50% of energy in developments derives from alternative energy sources – or they will not be signed off by inspectors. In Montrose City Mega Development, profiled as SA Affordable Housing’s September issue’s project, CEO Sam Mhlaba explains that the development has attracted interest from a solar energy provider, SolarReserve, although certain approvals required remain, for instance from Nersa.

SolarReserve is a leading global developer of utility-scale solar power projects, which include electricity generation by solar thermal energy and photovoltaic panels. In addition, SolarReserve has commercialised a proprietary advanced solar thermal technology with integrated energy storage that solves the intermittency issues experienced with other renewable energy sources.

“The attraction of their system is the capability to store energy in batteries, which means power is available at night and in winter. The remaining question is the lifespan of the batteries.” Apart from that, all geysers are solar-powered in terms of the requirements of SANS standard 10400-XA.

Johan van den Berg, Business Development Manager at Burgess Plumbing, says, “For the past nine years, developers have had to comply with SANS standard 10400-XA. So, from the moment of building the foundation, the developers should simply adhere to South African national standards. In order for any building to receive a certificate of occupancy, every involved professional from the architect to the builder needs to have complied.”

These are not necessarily high-tech solutions, he says, but include the building materials. “It can, for instance, mean the use of high-quality roofing insulation such as polystyrene ceiling boards (which is so thick it becomes insulation) or roll-on glass wool insulation or blankets. In addition, all hot water pipework is supposed to be insulated to a minimum of class R1 (‘R’ stands for thermal resistance. The R value depends on the type of material, its density and thickness). In a ceiling, if you have the insulation resting on the ceiling boards, there is a cold void created at night in the roof space. In inland areas where thin copper pipe has been installed, you have significant heat dissipation so it takes some time to get hot water in the morning – if you have the insulation there is a noticeable difference, thereby saving electricity.” He says this can be done not only in new developments, but can be retrofitted to existing homes. 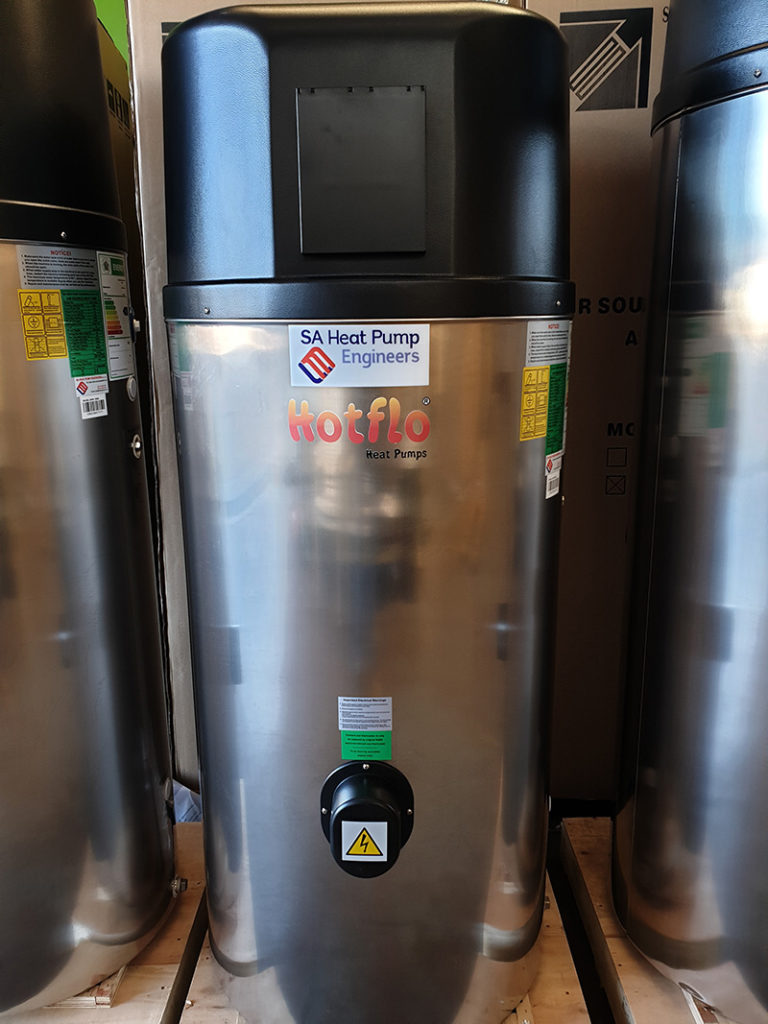 Innovative water heaters are negating the need for traditional energy-guzzling geysers, which account for 60% of a home’s electricity bill, according to Eskom’s website. There are a number of alternative options: solar power, heat pumps and instantaneous water heaters.

Each option uses substantially less electricity to heat water than do resistance heaters such as geysers – by how much, depends on their particular technology. All heat pumps have to declare their coefficient of performance (COP). In South Africa, because of high ambient temperatures of the surrounding air, an air source is used to heat water.

Sascha Altmann, managing director of Stiebel Eltron Southern Africa, says, “The most energy is spent for the domestic hot water heating. This is the biggest factor where you can save on energy. The biggest energy saver will be a heat pump. It uses the energy of the environment and transfers this to domestic hot water. As an alternative to a central heat pump solution, decentralised instantaneous water heaters are a great alternative. It will be a lower investment compared to a heat pump system, and the client will still have an energy efficient solution for his domestic hot water production. Instantaneous water heaters have no standby losses and waste a minimum of water, as the pipe distances are short.

“The big benefit of an instantaneous water heater is that it is installed close to the point of use, and so it can save water and electricity. You don´t have long pipe distances and you´ll have hot water immediately. The units consume electricity only when working and hot water is needed. You´ll have no stand-by losses, which will save the tenant or owner approximately 35-40% of his electricity bill, compared to a standard geyser. Furthermore, an instantaneous water heater will save a lot of space. Especially in the affordable housing segment, where space is often an issue, which is an important benefit to the tenant,” explains Altmann.

What are the market barriers for renewable energy solutions?

Altmann suggests that one big market barrier to more widespread deployment of renewable solutions is the higher initial investment that people have to make for a heat pump or solar system compared to a standard geyser system. “But,” he adds, “the return on investment is very quick, and afterwards the owner will save a lot on his running cost.”

The pumps require regular service in the same manner as does a car: without it, the COP will steadily worsen and the system ultimately fail – again, like a car. A basic service requires descaling of the heat exchanger, cleaning out the condenser to ensure no build-up of residue and checking the condition of the heat pump’s components, levels of gas and inspecting the pipe insulation.

Van den Berg attributes heat pumps not being more commonplace, to the same sort of negative perceptions as bedevilled solar heaters before it: substandard products were imported and often shoddily installed by unqualified crews, resulting in defective performance and disillusion.

“Stiebel Eltron has more than 40 years of experience with heat pump installation all over the world. We´re one of the market leaders in that segment and are trying with technical training and efficiency demonstration to prove that a heat pump is the best and most efficient way to produce domestic hot water. A heat pump is a complex system and there are many faults that can occur during the installation,” says Altmann.

“The benefit, of course, is that households will have a working and efficient system, that saves them more than 60% of the cost for domestic hot water heating,” says Altmann.

The payback time for a heat pump compared to alternatives is highly variable, as it depends on hot water usage, ambient air temperature and the COP of the actual device. A heat pump is only as good as its installation: Pipe distances must be kept as short as possible; and the pipework needs proper insulation to avoid energy losses. All this influences the performance of a heat pump and the efficiency you can get out of the system.

Altmann says, “Of course the payback time for heat pumps is dependent on many influencing factors, like hot water consumption. To give you an example, for a standard three-person household with showers, bathtub, kitchen- and handwash sink, the amortisation will be within 4-5 years. The savings that you can create in such a case with a heat pump, can be up to R70 000 within a 10-year period.” To calculate the estimated return of investment for your specific application, Stiebel Eltron offers a tool, which you can download online, at: https://www.stiebel-eltron.co.za/toolbox/tools/?excel.

Advancements in technology are being made all the time, but the pricing has not reduced due to the impact of the exchange rate. In hard currency terms, says James Vermeulen, Electrolux product manager: Green Energy, the price has come down to the extent that prices have not increased in recent years even as the exchange rate has considerably worsened. “For the same amount of money, today you get a lot more advanced technology than what you would have had in 2010, when Kwikot first started importing heat pumps. For instance, heat pumps that heated water to 55°C now heat it to 75°C, the same as what you would achieve with a resistance element – for a third of the energy.”