The use of solar thermal (ST) and solar photovoltaic (PV) systems in housing must increase if the demand on energy is to be managed in South Africa’s growing urban environment.

These systems are available and coming down in costs and payback period (5-7 years), therefore financing of affordable housing must stress the inclusion of these systems at construction stage, rather than as an add-on.

This is the opinion of Barry Bredenkamp, General Manager Energy Efficiency for the South African National Energy Development Institute (SANEDI), who started work in this area in 1996, when South Africa had amongst the cheapest electricity tariffs in the world and surplus electricity generating capacity.

At the affordable housing level, there must be the inclusion of solar thermal systems to provide hot water and the addition of PV systems to generate electricity for the householders. These systems could run independently of each other or work in tandem.

There is a lack of understanding as to the difference between the two systems and how the technological advances, even over the last few years, have reduced the costs of solar energy.

“What is evident is that the majority of the residential property market – 58% at the end of 2017 – includes homes valued at less than R600 000. About a third of the total residential property market is estimated to have been fully subsidised by the government. Housing affordability also remains a critical challenge. In 2018, the cheapest newly built house was estimated at R352 500,” says Bredenkamp. 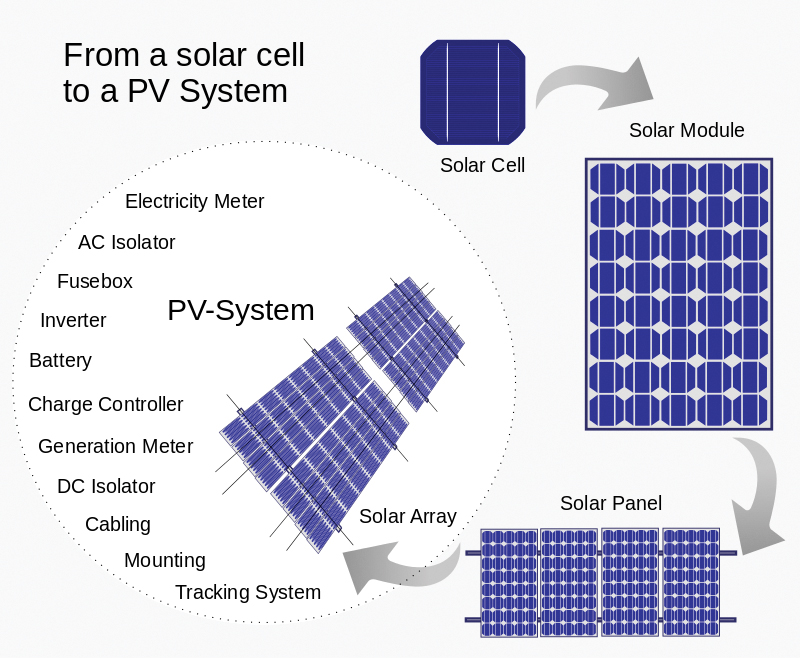 A solar cell to an array of solar panels and the typical components of a solar system. Image credit: Wikipedia

Solar thermal collectors use the same solar energy that photovoltaic panels do, but they generate heat instead of electrical power. A considerable share (40-50%) of electricity used in the residential sector is for hot water preparation. Solar thermal water heaters in this sector can reduce the electricity demand and thus lower the environmental effects, like CO2 emissions, caused by fossil fuel power plants.

“In comparison to other regions of the world, the use of solar thermal energy is still very low in African countries, even though the resource – the availability of solar radiation – is one of the highest worldwide and available in all African countries”, Bredenkamp continues. 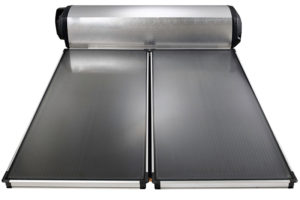 Many people assume that solar is related to solar thermal such as this flat-plate solar hot water system, however it also includes electricity generation through photovoltaics, or vice versa. Image credit: Solahart

These ST systems are well known in the market. The majority of the installed systems are thermosyphon systems that, in the South African low-cost housing sector, are relatively small in scale. They also do not need electricity for a pump or an electronic control mechanism, enabling an installation in regions without access to the electricity grid.

Typically, solar panels work by transferring heat from the collector to the tank through a separate circuit and a heat exchanger. Heat collected by the panel heats up water that flows through a circuit of pipes into a copper coil inside a hot water tank. The heat is then passed into the hot water tank and the cooled water returns to the collector to pick up more heat.

“If one is using electricity to pump the water flow, the energy consumed by the pump will offset some of the advantage of using solar thermal power, reduce the gains one is making, and lengthen the payback time. However, the addition of solar photovoltaic pumps would mean that they are entirely running on renewable energy,” says Bredenkamp.

The question always arises as to what will happen if the sun does not shine for an extended period, or what happens at night when there is no energy from the sun? By including a battery storage system to the PV installation, one can overcome this problem for at least a portion of the time. However, this solution comes at a cost, which should be included in the original loan from a financial institution.

The good news is that the cost of batteries has decreased, and the technology has increased battery life, but living ‘off the grid’ is not practical or affordable by most homeowners. There are three classifications of rooftop PV systems and, in South Africa, currently only option 1 (below) is available in urban environments, as disconnecting from the grid would not remove the monthly charges to the homeowner by the local utility.

What is needed, and has now been introduced, is quality control on the systems installed on people’s houses, which would also assist in unlocking financial support. 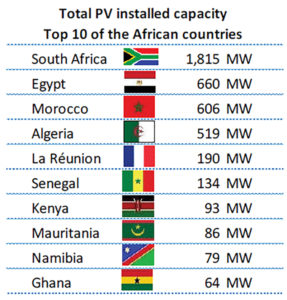 “The PV GreenCard is being developed by the South African Photovoltaic Industry Association (SAPVIA)1 in partnership with the German Solar Association and the German International Cooperation. The PV GreenCard will be a national, standardised hand-over or ‘as built’ report for rooftop PV installations, aimed at improving the safety and quality of installations. It will provide comprehensive documentation of the PV system, including information on components used and personal data of the owner, and will be a voluntary service from the installer that will serve as a guideline to both the installer and the customer on how to secure a high standard of PV system operation. The aim is for the PV GreenCard to be issued with every small-scale solar PV installation up to 100 kWp by suitable qualified installers,” adds Bredenkamp.

The installation and/or inclusion of solar PV in the construction of affordable housing, certainly is a step in the right direction in the fight to conserve natural resources, save money on utilities and combat the negative effects of climate change. The technology has come a long way in terms of quality, and the prices of these technologies have reduced significantly over the past 3 to 5 years.

Most of the world’s solar modules are made from crystalline silicon (or sand in its basic form). As greater quantities of solar modules are produced worldwide at greater efficiencies, the cost of solar PV keeps becoming more competitive. PV, as an electricity generation source, is sustainable, indefinitely renewable and environmentally friendly.

However, in this market, access to capital for the initial cost of the technology may present a barrier and it is therefore essential that financial institutions consider developing fit-for-purpose or ‘customised’ financing packages for the purchase of these technologies. Once installed, the savings accrued on the municipal electricity bill because of receiving energy from the sun, can be used to pay-off such a loan, especially since most of these systems are designed to last anything from 10 to 20 years,” concludes Bredenkamp.