Polokwane-based MarTek Roofing recently completed the roofing on a development consisting of 450 low cost government developed homes in Seshego Ext 78 in Polokwane, for Ixplore, who was the main contractor.

By Eamonn Ryan | All images by MarTek Roofing 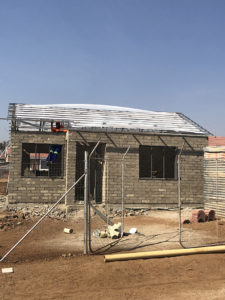 MarTek Roofing specialises in the design, cost-effective manufacturing, and erection of pre-fabricated timber and Ultra-Span roof trusses. The roofing component of the project remained on track for its planned mid-September completion. The project is a fully government funded low cost housing project for the below average income group – there is no financing for home buyers.

Managing partner Sakkie Maritz describes the ‘new low-cost spec’ as being light gauge steel trusses with timber no longer being used. “Being a MiTek licensed fabricator we quote on ULTRA SPAN trusses with sundries and consumables. The only timber we still use is 38 x 38mm Biligom treated wall plate.

“The trusses as well as sundries are ordered ‘cut-to-size’. We do the truss assembly in the factory with templates for accuracy. Then the roof kit with sundries is delivered to site. MarTek also does the erection on site, because of the complexity and intricate tools you need to execute the fit.”

Maritz explains that the Limpopo National Home Builders Registration Council (NHBRC) wanted full technical design reports on the steel as well as the design and software testing and approval, even though the NHBRC head office had approved the product in 2008. The NHBRC oversees the project.

“However, we said, ‘you know, what let’s comply’,” says Maritz. “Transport and storage are additional challenges, but after the first few houses, we got the machine well-oiled and thereafter running smoothly – not without hiccups, but okay.”

A substantial expense arose from the need for special tools and equipment. A decent hammer costs R400, and 3c for a nail. With ‘USP’ you need a R7 000 drill machine and 34c a screw in every worker’s hand before fitting can occur. Consequently, the tool invoice came in at approximately R180 000.

“Adding to the cost of drills is their maintenance – the need to charge them every day, and the ever-present potential of theft. If you slip up, you don’t have batteries for the next shift.”

Formerly known as MarTek Argitek Tekenaars en Bou Aannemers CC, the company was founded by Mona Anderson and Sakkie Maritz, in Welkom, Free State, in 1991, comprising of all levels of construction. In 1992, the business relocated to Shayandima, Venda, and in 1994, changed its name to MarTek Roofing, and in 2005 opened its second factory in Polokwane. In recent years the partnership grew to four members; namely SakkieMaritz, Glenda Maritz, Quintin van Wyk and Mona Anderson. 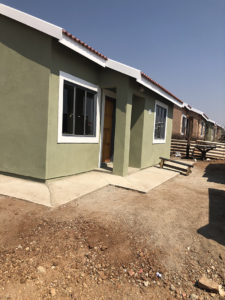 A row of completed homes.

MarTek Roofing is a registered MiTek licensed fabricator, now solely focusing on the manufacturing and erection of timber and galvanised steel trusses, using MiTek’s 20/20 Suite of Applications. We are also registered members of the ITC and NHBRC.

“The majority of our clients emanate from regions throughout the whole province of Limpopo, and our reputation has generated clients from as far as Port Edward, Botswana and Mozambique. We have worked roofs of all shapes and sizes, from your standard garage, right through to large and complex government buildings and shopping centres,” says Maritz.
The Ext. 78 low cost project for Ixplore was started in early December with a showhouse. Though Maritz says, “We actually started in January with the main order, and the roofs were completed in mid-September.”

“Thereafter, we were only responsible for the ceiling battens without ceiling boards.”

Project on track and on budget

Maritz says the project has been performed so far on budget as outlined in the original quote. “At one point we ‘dropped a few pennies’, but with the steel increase we are back to the quoted amount. We plan to have finished within that estimate,” he says.

“The reason for the small decrease was saving of material. We realised that our estimates were too high and therefore on the second batch we ordered less material. Also helping MarTek remain on budget was that logistics were not a significant problem on this site.”

Communities are regarded as a key role-player in any project today in South Africa, with a requirement to use local labour. That has not been a particular challenge for MarTek as it is in any case a local company. Maritz says it remains a challenge to find skilled labour anywhere “where you are supposed to use as many locals as possible”.

“Nonetheless, we are proud to announce that we employed at least 50% locals and furthermore promoted at least five workers from being contract employees to permanent in-house workers, ranging from labourer to carpenter.”

What makes the system special or unique, says Maritz, was that 80% of the design was by MiTek and the remaining 20% by MarTek. It takes considerable skill to design and manage such a project. The software from MiTek is just amazing and you don’t get far without this part of the process. The engineering and development from MiTek was the part that impressed the NHBRC. I believe our report and plans supporting our tender bid were considerably superior and more professional to those of our competitors. MarTek does the estimating.”

MiTek Industries South Africa, with its head office in Midrand, is a leader in the design, manufacture and supply of roof structure related products and services. MiTek is a worldwide leader in roof truss technology. With its manufacturing facility in Gauteng and regional offices in Cape Town, Port Elizabeth and Durban, MiTek is well placed to supply the building industry with the widest range of timber connectors and light gauge steel products for the roof truss manufacturer and hardware stores.

It was not only MarTek that won MiTek the tender, says Maritz, “The fact that we have in excess of 25 years’ experience as truss fabricator and erector, also gave us ‘a bit of an edge’, which the development benefits from.” 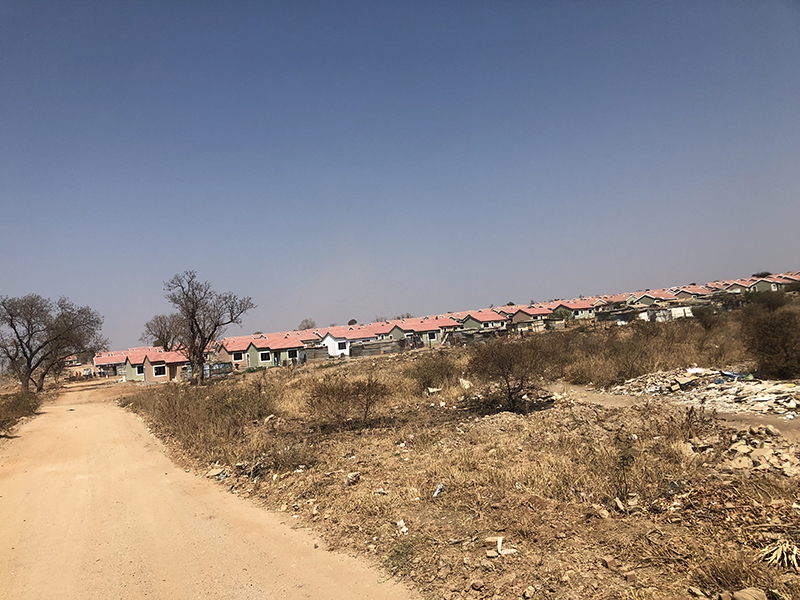 As with any project there are occasional disagreements, but Maritz says he believes the client is happy enough with the end result that they are talking of awarding MarTek another contract.
List of professionals: