In total, the development will yield 14 000 units, of which Phase 1 (itself split into Phases 1A, 1B and 1C) is currently under construction, and will yield 5 602 units to be known as Montrose Township. The development has at its heart the upliftment of the community, and empowerment is consequently key to every activity. There are between 750 and 800 people working on site every day, creating a mini-economy that is already uplifting the local community. 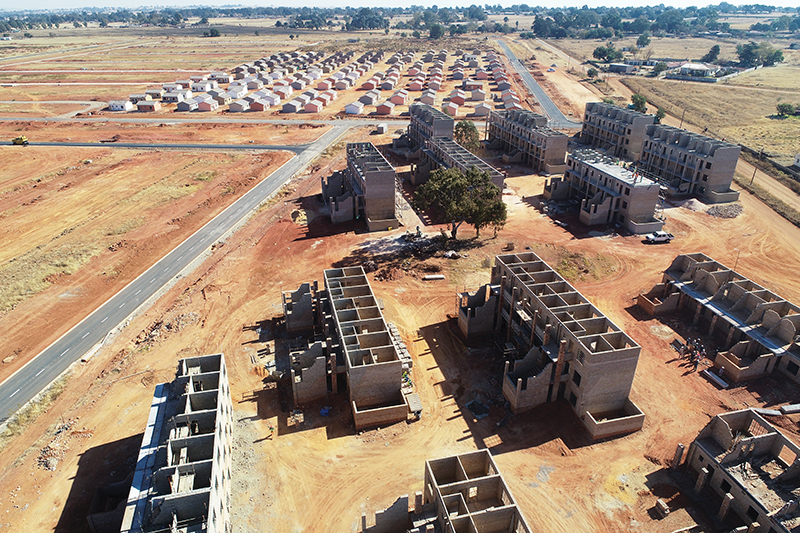 Sam Mhlaba, CEO of Montrose City Mega Development, says construction of Phase 1A will take four years, with construction having commenced in November 2017. Phase 1 has a development cost of R3.25-billion, which includes housing, infrastructure and schools; Phase 2 is R6.65-billion; with other amenities such as a Prasa (Passenger Rail Agency of South Africa) connection an additional R1-billion, as well as R550-million for renewable energy.

The development was championed by SCM Properties and Development, which is the main developer and part owner of Montrose City along with the primary client, the provincial department of COGTA and Human Settlements. 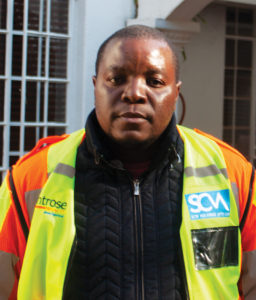 At an early stage, the client opted to convert the project to a mixed-use one by establishing offtake agreements between government departments and local businesses such as mines, to create an economic component. “The thinking was that local residents would require job opportunities within walking distance (where possible) and these offtake agreements would help establish a host of local businesses to supply the mines, and other such businesses as may in future be established,” says Mhlaba. “In other respects, the mixed-use concept led to including bank-bonded units in addition to 100% government subsidised units.” In this respect it mimics the Cosmo City concept with all the elements that government policy determines constitute a human settlement: schools, shopping malls, health facilities, police stations, a community centre with a hall, parks and recreational areas, a library, a cemetery and several churches.

Cosmo City was one of the pioneer mega city projects in South Africa, upon which a number of refinements have been implemented, as seen in Montrose City. “It was an experiment by government to establish the viability of a mixed-use development for which it became the flagship nationally. Montrose is therefore an enhancement – it is never about housing alone, but mixed use for varied income groups, public amenities and spaces, employment opportunities; an integrated transport system.

“Building a house is easy – but on its own doesn’t improve living standards. Without local employment opportunities, residents would soon leave. To improve quality of living, the development is an entire package that ticks all the boxes of a sustainable development – jobs, transport and education,” says Mhlaba.

The integrated transport model means residents can travel by train as the cheapest form of transport, while every activity they need is provided within the development leaving no excuse to ever go outside the location. Proximity to rail transport, which will extend from Randfontein to Middelvlei Station (within Montrose City Mega Development) and later extend to Carltonville is in itself a drawcard to types of business that are not geographic-specific but simply require access to the cheapest form of transport.

The mixed-use model aims to balance different income groups, including 100%-subsidy (incomes of zero to R3 500/month); with social (rental housing); GAP Housing/FLISP homes (combined household income of R3 500 to R15 000/month) through to bonded affordable homes with no government involvement, which cover the spectrum of homes valued from R350 000 through to more than R1-million – such as homes of 90m² with two garages. “The latter segment can find housing anywhere, but are attracted to a mixed-use development due to its integrated nature with everything available on site. This factor can result in financial savings to residents in not having to pay for transport to work, school or clinics, greater security as well as improved quality of life through increased family time. As the Gautrain stations have demonstrated – proximity to a railway station brings tremendous economic growth.” 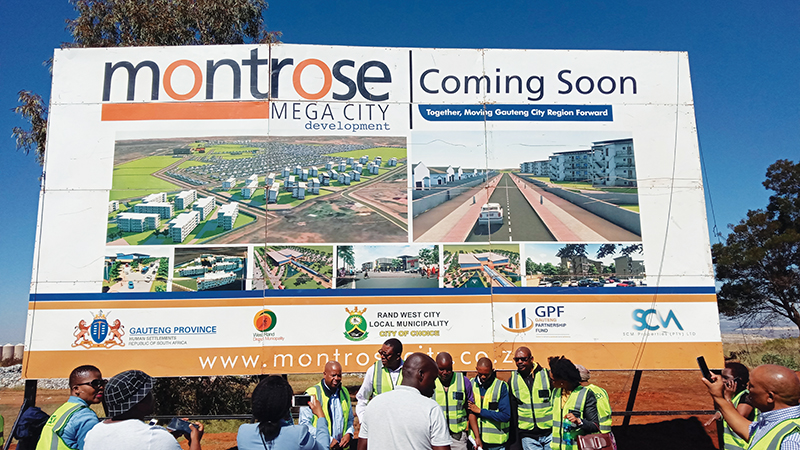 This is how Cosmo developed – once the residential component was established, retail and industrial elements followed. Mhlaba explains that the sequencing and co-ordination of the Montrose City Development Mega Project was planned from the outset so that every activity or phase of development is a maximisation and enhancement of the development and its prosperity.

The development is split between each type of housing to the following ratio:

Rental rates can have a spread of R800/month to R6 000/month (the latter being an entry level two-bedroom house of 33m², and up to 50m², to 60m². Different types of housing will be grouped into neighbourhoods with their own access control and separated from other neighbourhoods by open spaces. The 100% government subsidies and social housing will consist of apartments, while bonded units are stand alone.

There is also approximately 680 rent-to-own units aimed at mine workers and government employees, says Mhlaba, which will be developed through an offtake agreement with mines and managed somewhat differently. “Such an agreement, covering five to ten years, then enables funding to be sourced.”

Marketing will be done in conjunction with the major banks, home loan originators and real estate companies, with the developer SCM Properties and Development holding workshops with potential beneficiaries who qualify for government FLISP subsidised and affordable GAP housing – given the development targets multiple income segments.

“It started as a green fields development meaning it was a land used for farming that was turned into Montrose Township. It provides subsidised housing: 100% subsidy (1 608 units in Phase 1) and for military veterans (174 units), social housing (1 915 units), bonded units (1 225 units), and apartment units/Community Rental Units (680) for a total of 5 602 units,” says Mhlaba. Under government regulations, there are qualifying criteria for each category, such as a wage cap or provable military experience.

There will ultimately be a population of between 56 000 and 70 000 people in the township. Phases 1 and 2 will be split by the railway line, and as it will be a busy place, Mhlaba explains it will also require two bridges over the railway line to link the two halves without creating bottlenecks. The regional shopping centre, workplaces and other facilities may swell the population during the day. 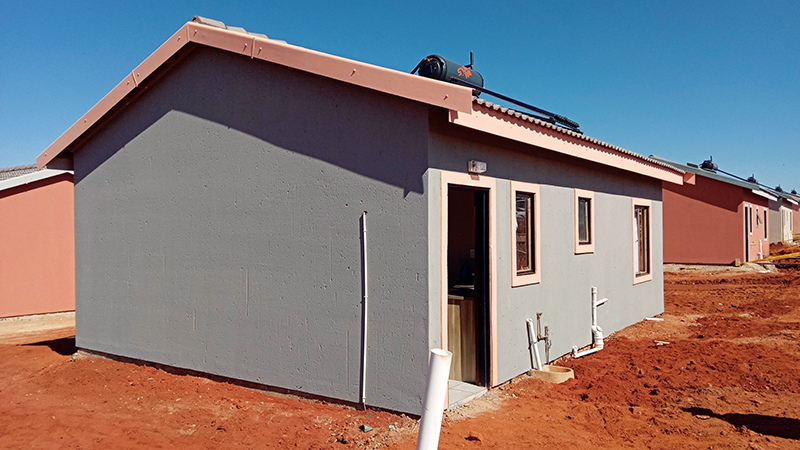 Assisting the development is the fact that the local authority was a prime mover behind it, and consequently left no obstacles in its path. “It was a collaborative effort,” Mhlaba says.

The municipality has sufficient capacity in terms of water and electricity to provide for Phase 1, but thereafter some additional infrastructure will need to be constructed. “There’s sufficient water for the initial 5 600 units, and we are busy with the connection of the sewer to the municipal line where there is also existing capacity without upgrades required,” Mhlaba explains. The development will be set up for rainwater harvesting, as well as grey water treatment of used water to minimise consumption.

“There is available electricity up to a maximum of 3 000 units. For the remainder of the 14 000 units, we’re involved in a three-way agreement between ourselves, the municipality and the Development Bank of Southern Africa (also a partner in the development’s special purpose vehicle) and have reached agreement on a plan of action which will be implemented during the next two years as phase 2 materialises, to provide sufficient electricity.”

For instance, there are plans for two adjacent solar plants covering 30ha each over a 20-year period, which may ultimately provide power. Further ‘greening’ of the community will stem from plans to recycle grey water within the community for industrial purposes rather than returning used water to the municipal infrastructure. These will become part of Phase 2.

There was considerable community excitement and expectation at the commencement of works, says Mhlaba, but not unexpected given the high levels of poverty and unemployment in the area. This was resolved through communication and education. “People realised this was a long-term project and they should not be impatient to see some benefits economically and socially, as we will get to everyone.”

A final challenge, common to all developments, is that the units – including proposed industrial, manufacturing, commercial and retail spaces – have to be fully occupied. “It will not be viable if only 50% is occupied, we need a 100 % occupation rather sooner than later and this would be the true measure of success of the Montrose City Mega Development. Our role as facilitator is therefore to create a conducive environment which makes the mixed-use components commercially attractive. Then we will move on to Phase 2, because the demand for housing will automatically increase,” says Mhlaba.

In a development as complex as this one, the developer cannot afford to sit back and rely on the pace of government action, as momentum was vital. Mhlaba says the turnkey developer SCM Properties and Development took the initiative in bringing together all the parties – Transnet, Prasa, Department of Education, Human Settlements, Rand West City Local Municipality and other related parties to ensure all the legs moved in a synchronised fashion. “It was a journey that began in 2015 until we broke ground in November 2017. As the land was a farm, it had to be converted into a township for planning purposes. We acted as enabler of all the professionals, and the myriad processes: EIA, geotechnical, Surveyor-General and more. For instance, in respect of the school we are entering into a partnership whereby we build a smart school which will align with education department goals.