Work on the Mtentu bridge was forced to a standstill last week due to violent protests, according to Sanral who said their workers and management had been threatened by people carrying assault rifles. 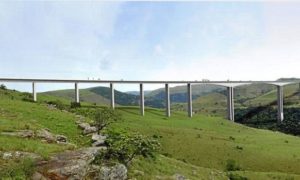 Armed protesters demanding jobs and business opportunities in the project stormed the site and were still causing disruptions last week when the police were called.

The protestors who claim allegiance to a business forum called Federation for Radical Economic Transformation that has received backing from the local Xolobeni community who have themselves been engaged in conflict with an Australian mining company who wish to mine the Wild Coast region.

“The community has been sidelined. We were promised jobs, but those never materialised. There are no business opportunities for locals. Even the building materials don’t come from this area.

“We cannot get close to their offices to deliver CVs because there is a security company called Zero Tolerance standing there with big guns. The community cannot walk freely in that area,” says leader of the protest against Sanral, Thwesha Silangwe.

He denied that there had been a violent protest, saying, “people were just singing – there was no violence.”

Louw Kannemeyer, a Sanral engineering executive, says the protestors do not understand that there aren’t enough jobs on the project to hire everyone.

“Sanral cannot condone hooliganism and aggression as a means of demanding who must be given jobs,” he says.