If researches from Purdue University, USA, are to be believed, a new 3D-printed cement paste could one day be used to make buildings more resilient to natural disasters. The unique paste, based on properties found in arthropod shells, has the unusual quality of becoming tougher the more it cracks. 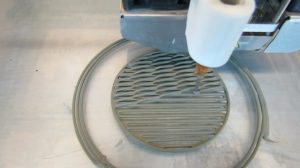 The team was initially inspired by the mantis shrimp, which conquers its prey with a “dactyl club” appendage that grows tougher on impact through twisting cracks that dissipate energy and prevent the club from falling apart.

“Nature has to deal with weaknesses to survive, so we are using the ‘built-in’ weaknesses of cement-based materials to increase their toughness,” said Jan Olek, a professor in Purdue’s Lyles School of Civil Engineering.

According to researchers the idea would be to control how damage spreads between the printed layers of a material, “like trying to break a bunch of uncooked spaghetti noodles as opposed to a single noodle”.

“3-D printing cement-based materials provides control over their structure, which can lead to the creation of more damage and flaw-tolerant structural elements like beams or columns,” said Mohamadreza “Reza” Moini, a Purdue Ph.D. candidate of civil engineering.

A paper describing the work was recently published in the journal Advanced Materials.