September / October 2020 – The conveyancer’s options when the Deeds Office rejects deeds for the wrong reason: Part 1

Whatever the public may have to say about civil servants, having worked as a junior and senior examiner in the Pretoria Deeds Office from the middle 1980s for four years, I can vouch for the fact that the Deeds Office is undoubtedly the civil service office served by the most productive and committed civil servants in the whole of our civil service with regard to the processing of designated workloads. 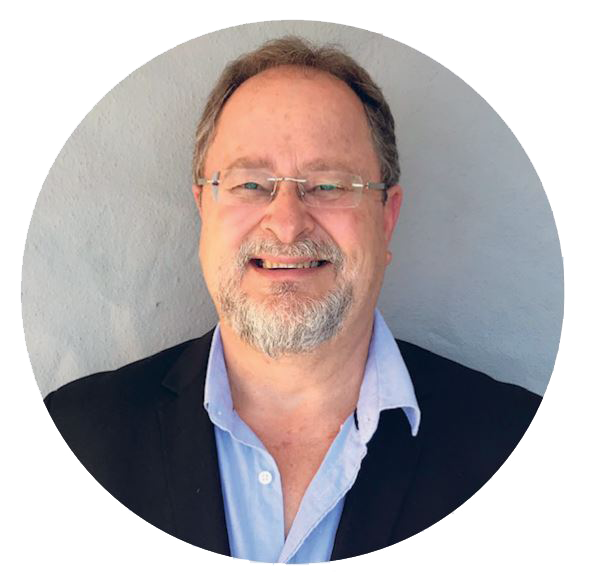 The reason for this is simply because each morning a junior examiner must hand in 38 examined deeds before 9:00 and collect the next 38 for examination, while a senior examiner has to turn around 59 deeds each day. These examined deeds are then monitored by an Assistant-Registrar of Deeds before it gets either passed for registration or thrown out as rejected.

Aside from the resilience required to process this constant daily workload or quota of allocated deeds, a sound technical expertise and thorough knowledge of the law are essential to ensure, firstly that deeds and documents which are passed for registration comply with the Deeds Registries Act, 1937 (No. 47 of 1937) or any other law, and secondly that deeds or documents which are rejected get rejected for the correct reasons.

The amicable working relationship between the Deeds Office officials and the conveyancing fraternity has always allowed for issues to be resolved in a constructive manner. A contentious issue such as the incorrect rejection of deeds or documents due to the incorrect interpretation of the law can also be addressed in the same manner if the necessary corrective measures are taken immediately to make certain that not only the responsible examiner but also all other examiners in that Deeds Office are informed about the correct legal position which nullifies the incorrect note. This will allow for prompt corrective maintenance on this specific deed and straightaway stop all examiners from continuing raising the incorrect note.

What remedies has a conveyancer when an examiner at the Deeds Office rejects a deed for the wrong reasons?

1. Interaction between conveyancers and the officials at the Deeds Office

Conveyancers, unlike their colleagues in the litigation department some may say, thrive on finding solutions instead of on rivalry and adversity. This is demonstrated on a daily basis when conveyancers engage with examiners at the Deeds Office to resolve queries raised on deeds, with such engagement resulting in either the compliance with and the removal of the notes raised, or the attendance to the faults which require correction by the conveyancer and the subsequent re-lodgement of the rejected deeds.

A decent measure of goodwill exists between conveyancers and the examiners and other officials at the Deeds Office because of having to work so closely and regularly together. This is a relationship which is further enhanced by the mutual respect for and trust in the technical expertise of the respective parties, and the preparedness of the examiners and officials to interact with the conveyancers when their notes are questioned.

However, occasionally, when a deed is rejected for the wrong reason and the examiner refuses to concede on a mistaken interpretation of the law this valued relationship is put to the test. The consequence of such erroneously rejected deed or deeds on a developer’s cash flow, especially in the affordable housing market where the lodgement date of the deeds for a turnkey house is determined by the anticipated transfer date, which again is linked to the date the purchaser takes occupation of his house, can be disastrous. That is apart from the fact that the purchaser as end-user must deal with the fact that he can no longer take occupation on the anticipated date which causes last minute inconvenience and forces expensive alternative measures to be taken like security costs for the empty completed house by the developer and alternative accommodation by the purchaser.

We will look at the implications for a set of deeds, consisting of a transfer and a mortgage bond, where the examiner raised an incorrect note regarding the interpretation of Sections 10A and 10B of the Housing Act, 1997 (No 107 of 1997) [‘Housing Act’] with the transfer of a FLISP house to the purchaser as beneficiary of a FLISP subsidy. The examiner requested a consent letter from the Department of Human Settlements before allowing the registration of the simultaneous mortgage bond which finances the balance of the purchase price for the FLISP house.

The Government, in terms of the Housing Act, introduced a variety of National Housing Subsidy Programmes which provide the poor and the low- to middle income households with access to adequate housing.

The FLISP is specifically intended for the market segment whose income is inadequate to qualify for a home loan, but exceeds the maximum limit applicable to access the Government’s ‘free basic house’ subsidy scheme. This market segment earns between R3 501 and R22 000 per month.  Households in this segment, if buying a home for the first time, may apply for a FLISP subsidy. 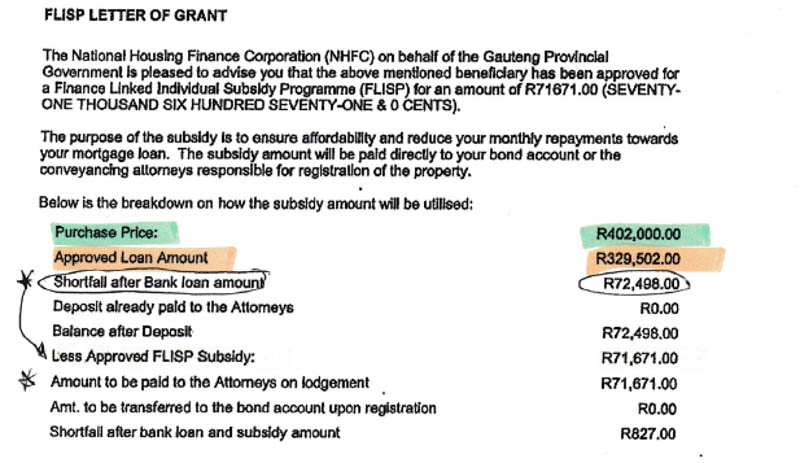 The NHFC as administrator of the FLISP subsidy is thus fully aware of the requirement that a mortgage bond must be registered simultaneously with the transfer of the property for which a FLISP subsidy was granted, as can be seen from the above extract from a FLISP Letter of Grant it issued, where specific reference is made to the loan amount of the mortgage bond.

A purchaser who receives a FLISP subsidy from the State does so under stringent conditions as described in the Housing Act.  Section 10A(1) of the Housing Act prohibits such purchaser from voluntarily selling this house purchased with a FLISP subsidy within a period of eight years from the date on which the property was acquired, unless it is first offered to the relevant Department of Human Settlements. Section 10B(1) of the Housing Act exempts the financial institution which granted the credit (mortgage loan) for this credit-linked subsidy from first offering it to the relevant Department of Human Settlements in case of the involuntarily sale of the property (sale in execution).

These restrictions are incorporated against the title deed for the stand on which the FLISP house was constructed as a new title condition imposed in terms of the prescribed legislation in the following manner:

The conveyancer’s options when the Deeds Office rejects deeds for the wrong reason: Part 1

This ensures that if such purchaser attempts to sell and transfer the FLISP house during the first eight years after transfer that the examiners at the Deeds Office will request compliance with this title condition by calling for the consent from the Department of Human Settlements as prescribed in Section 10B(7) of the Housing Act.