The trials and tribulations of employing community workers

Peter Marshall, seemingly destined to be a farmer from England’s Cotswolds near Epping in Essex, came to be a globe-trotting civil engineer, and is currently resident engineer on Montrose Mega City. Marshall spends most of his day hosting workshops for community part-time workers to get them to see past the end of their next pay cheque.

A large part of Marshall’s job is hosting regular educational workshops to uplift hundreds of aspiring construction workers in Randfontein. He has an affinity for the people of developing countries and educating them. Marshall has worked throughout Africa and boasts the President of Eritrea as a personal friend. From Nigeria to DR Congo and from desert conditions to the Blyde River Canyon, his experience of diverse working conditions has led him to describe the requirements of a civil engineer as ‘being able to make tough decisions and resolve problems’. That, he says, is precisely what is lacking in the modern South African profession, where personal initiative has been surrendered to committee decision-making.

Mentoring others, training and development is a major ingredient of Marshall’s career, in part because he says there is an enormous desire for education, training and upliftment in Africa. He gives the example of a project he did in Eritrea: “The government had borrowed the money for a pipeline project, and it was going to come in under budget. I said to the government, we can either return the surplus money to the lender or I could take it and build a school for all the villages that were associated with the project. That is what we did, and a school was built for all ages: with the preparatory children coming in from 6:00 to 10:00, the next age group followed; and finally, senior kids thereafter. The parents ran the school and it was kept spotless.

“If you get the right thirst for education you can get things done. This is why I work in poor countries – you don’t get the same satisfaction from working in developed countries.”

Born in 1941, Marshall says, “I’m a farmer’s son, one of four boys and one girl. Our farm got wiped out by foot and mouth disease – the entire farm and livestock was bulldozed and burnt – the lot. Thereafter, I studied Agricultural and Mechanical Engineering – to keep my father happy.” In those days, the UK still had compulsory military service. Marshall relates how he became an officer in the Gordon Highlanders of the British Army. “The assessment process consisted of us, the ordinary troops, to march past a panel of officers who would ask you a question – and based on your answers you might be recognised as officer material. I was asked some technical question and I replied, ‘I haven’t a bl***y clue, but I’ll ask my sergeant,’ and I was appointed second Lieutenant on the basis of that answer and posted to West Germany.” He eventually became a Captain.

Earlier, he had proved a maverick spirit: “I was on duty one day – which basically means checking the toilets – when it was reported to me that the entire officer corps of colonel, the brigadier, the lot, were drunk in the early hours of the morning. I had them all locked up for the night. You can’t have one rule for the ranks and one for the officers – it ruins respect.” They couldn’t touch him, he says, but it blighted his military career, because he was thereafter posted as far away as they could possibly find, to what is today Malaysia. At that time it was in the throes of the Malayan War in the province of Borneo.

That three-year military experience gave him the wanderlust, and he has seldom been back to the UK. He added to his qualifications by studying civil engineering at Nottingham University and then looked for work abroad. “There were jobs going at the time (the 1960s) in Bermuda and South Africa, so I flipped a coin and that is how I came to this country in 1966.”
Like any civil engineer, he has had to go where the work is, given that the construction cycle (like now) has been through many peaks and troughs. Although he has worked in many developing countries building their infrastructure, South Africa has been his home base throughout.

His motivation for choosing civil engineering was ‘the challenge of the discipline’. He gives the illustration of constructing a pipeline in the middle of the Sahara, where the nearest town is 3 000km away, and he needed aggregate to mix concrete for the construction. “I sent tribespeople out to look for all the car and truck wrecks, from which we made chisels. We then located a nearby outcrop of rock from which I sent a sample to the university in Asmara to find out if it was acceptable. Then I got the people to chisel away and measure sizes in sieves. That’s the initiative that’s required in civil engineering. 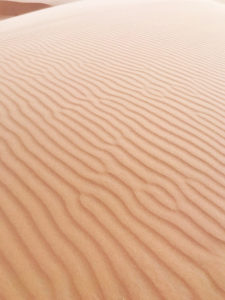 Finding aggregate in such circumstances as these can be a challenge – but not for a civil engineer. (Communikait)

“In civil engineering, you have to adapt plans to all sorts of underground conditions, and the civil engineer has to exercise the authority to make decisions on site based on those changing conditions. If he has to move a road a metre, he can do it. It often takes guts to make such decisions, and the problem in South Africa at the moment is that nobody has the guts and authority to do so. An Engineer can manage bad decisions – but no decision is a greater problem. Worse than that is a collective decision.”

One of his first work experiences in South Africa was enough to put any Engineer permanently off the profession. It was the time when the Blyde River Scheme was being built by one of the large contractors which today is in trouble. Marshall had by now established his own sub-contracting business. The main Contractor was in cash flow trouble at this time, and at the conclusion of the contract, says Marshall, he was told that, although he had completed the contract in a completely satisfactory manner, the company was not going to pay him the R12-million he was owed. He was invited to sue the company for it but was assured the company’s lawyers would successfully postpone a court case for at least five years, if they didn’t outright bankrupt him in legal fees. “That’s how these big contractors deal with you as a sub-contractor,” he says.

Fed up, he accepted a job in the Eritrean desert, living in a fabricated steel hut. “It’s one of the poorest countries in the world, but the people are completely honest and conscientious workers.”

Hope for the poor man

Marshall’s scope of responsibility for Montrose Mega City is training workshops to train community-recruited workers; planning; and time-related management, which he fulfils with two assistants, who are trainees. This primarily involves educating them on the basics of work.

He outlines the challenges of being the resident engineer of an affordable housing project which is required to employ a large proportion of workers from adjacent communities. The problem for the sub-contractors on site is that they may one day have ten workers on site but just two the next day. The problem with temporary workers is the absence of loyalty or even discipline.

“It introduces a short-term view to the job,” he explains, “so it becomes difficult to train them in the aspects of construction, whether it be plumbing or fault-finding. I try my level best to hold workshops all the time, but it’s a massive battle.” A challenging aspect of this is to educate people that technical information is derived from textbooks and not Google. He mentors any number of people who show willingness to learn.

Marshall’s mantra is the three Cs:

“If you get those three on a project, you’re off to a good start. A large part of managing a project is coordinating the delivery of materials on site to ensure work takes place consistently – and not waiting until they’ve run out.

I also have to teach them about cash flow – for instance, not to order goods between the 25th and last day of the month because your terms of payment then go from
60 days to 35.

“I similarly teach them before going on site, to have a clipboard and checklist to ensure they have all the tools for the day’s work: a spirit level; a hammer, and the rest. For people who have not worked on a building site, or maybe not even worked at all before, these are important matters to learn. In their rural upbringing there has been no value placed on time – and time equates to efficiency on a site,” says Marshall.

“The government has made it difficult, with its CIDB grading system, for these SMEs to grow substantially. Now they’re a Grade 1, but what company is going to give work to a Grade 1, when what is really needed is experience at a Grade 5 or 6 level. They cannot get out of that trap. They cannot get off the ladder until they’ve done a certain type work. This is the heart of what I am trying to achieve on this project, by giving them such work. However, the whole development plan for the industry was developed by the ‘suits’ on the 13th floor, who’ve never worked at the coalface.

“My objective on this project is to build up the SMEs. My job is to raise the level of quality on the project while instructing them on maintaining their cash flow, so as to be viable and sustainable. The challenge in construction is that you have work for eight months but pay expenses for 12 months, when you factor in having no work, down times, public holidays and rainy days.”

Just as important, he says, is educating them on using the correct materials for a job, as workers are unfamiliar with the application of different materials. With 600 workers on site, Marshall has his hands full, and can only do spot checks.