South Africa’s massive housing backlog increase can be attributed to a combination of growing population, smaller household sizes, the migration of economically active people from rural to urban areas and high unemployment levels which are acerbated by low growth economic conditions.

While there have been numerous media reports detailing these aspects of the crisis, what is often overlooked is the income diversity of households that require housing, which have different levels of income and affordability. Given high unemployment levels and extreme socio-economic disparities, most of the demand for housing is from households earning below R3 500 per month. There is however also a substantial amount of people who are in the ‘missing middle’.

These are households that do not qualify for a full subsidised (free) home from government nor can they afford to purchase an entry level home and repay this debt through a long-term mortgage loan. Therefore, these households need some financial support from government and those in this predicament are referred to as the ‘gap’ market. The number of South African households that find themselves in the gap market is estimated at 25% of the overall housing backlog, an increase from 2009 when the figure was 18%.

For the missing middle government offers a capital subsidy termed the Finance Linked Individual Subsidy Programme (FLISP). The purpose of the subsidy is to bridge the affordability gap in order to provide access to entry level housing within a family’s affordability constraints. Previously, FLISP was only available for mortgages, however the Department of Human Settlements is in the process of broadening the scope of FLISP to include other forms of housing finance. This is partly due to the poor uptake of FLISP, as the table below indicates.

The purpose of FLISP is twofold, either to reduce the total [home] loan amount (and therefore improve affordability) or to provide a borrower with equity (a deposit), which is sometimes required by lenders. The FLISP subsidy is available to households earning between R3 501 and R22 000 per month. The subsidy ranges from R121 626 (for households earning R3 501) to R27 960 (for households earning R22 000). As the extent of financial support (FLISP) to bridge the affordability gap the capital subsidy amount is highest for the lowest income earners and reduces as household earnings increase (the subsidy decreases consequently in R500 income tranches).

Ironically, the cost of homes in the affordable housing market has increased to the point where affordable housing is unaffordable for a large portion of the ‘missing middle’ market it is supposed to cater for, as an entry level new build home of 40m² costs from R352 500 upwards (source: Centre for Affordable Housing).
In 2018, government attempted to address the affordability shortfall by adjusting the FLISP subsidy, both in terms of target market (FLISP was expanded to include households earning up to R22 000 and was previously R15 000), as well as increasing the quantum of the subsidy across all salary bands. However, there is still an affordability gap as illustrated in figure 2, which examines the ability of a household to afford an entry level home.

The black line in figure 2 indicates the average cost of an affordable house. Prices of an affordable house can however also vary as price is determined by several variant costs such as location, topography, municipal services required and characteristics of the house, such as a self-standing unit as opposed a medium density unit.
The purple line in figure 2 indicates the potential purchase price of a home (includes FLISP subsidy and transfer fees) based on the average affordability levels of a household.

The red area in figure 2 indicates the affordability gap between the average purchase price of an affordable house and household affordability.
The blue area in the graph indicates surplus income in respect of purchasing an entry level home. 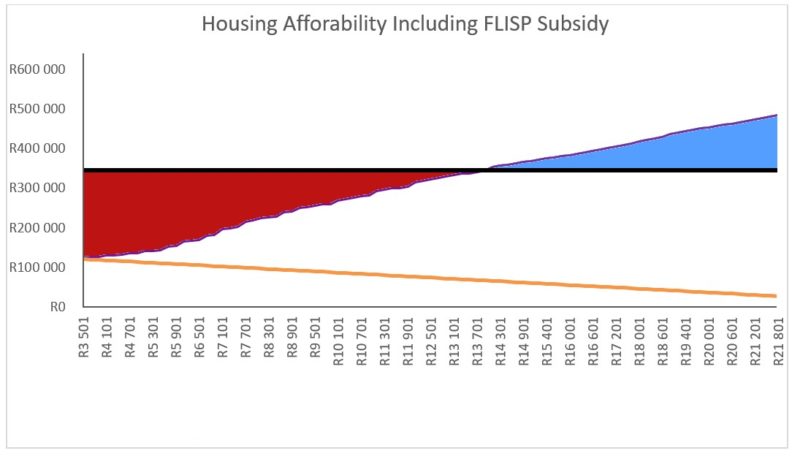 Based on the graph in figure 2, a household earning between R3 501 and R13 701 is not able to afford an average entry level priced house. For example, a household with an income of R3 501 can only afford to purchase a home of R125 945, which is far below the price of a new build entry level home.

It is only households earning upwards of R13 701 that can afford to purchase an entry level home. One can argue that households earning above the previous income threshold of R15 000 do not need to receive state support in the form of FLISP and that these funds should rather be used to increase FLISP amounts below this threshold, therefore decreasing the number of households below this level which will be able to afford an entry level home.

According to the above graph the cost to build an RDP home in 2018 should be R82 260, however the state pays R250 000 for each unit. This is indicative of product creep as the government provides a superior product to the basic incremental product that was provided in 1994. The sharp increase in cost severely impacts government’s ability to provide homes to the indigent and this largely accounts for the housing backlog doubling since 1994.

The housing delivery statistics supports the view of government overspend on subsidised housing. During the 2005 / 2006 and 2006 / 2007 period, government delivered the greatest number of subsidies.

Notably the 2005 / 2006 and 2006 / 2007 periods also coincide with government providing many incremental housing (serviced sites). This further reinforces that government is unable to keep up with demand as it provides a home which is unaffordable both from a fiscal and critical mass perspective. If, however, incremental housing was only provided to households, the majority (if not all) of the housing backlog would have been eliminated. As this is more fiscally affordable to the state and increased housing delivery would have been achieved.