A success story for an energetic entrepreneur

Just over a year ago, Sherwyn Esbend’s office in Durban’s North Coast Road was an empty space. Today, it is subdivided into separate offices including a smart reception area and he has just taken delivery of two brand new bakkies.

Over the past two years, Sherwyn Esbend has built a vibrant construction business that repairs properties on behalf of insurance companies. But it has been a challenging journey and one where his business philosophy of delivering quality results and ensuring top notch service have stood him in good stead. 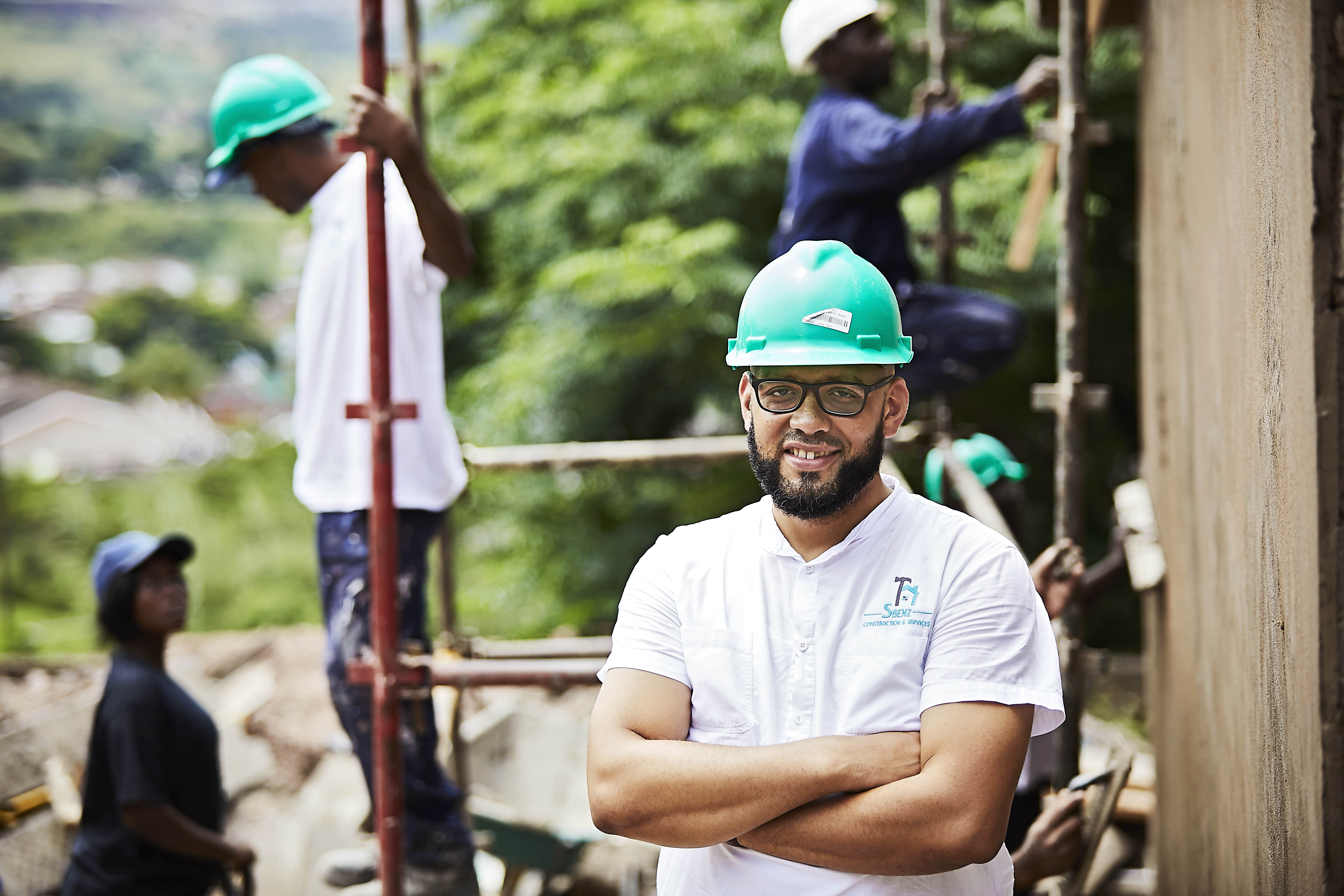 “I tell people who want to go into business that the more they grow, the bigger the challenges they will face and the larger the potential problems will be. In the school of life, before you go to the next grade, you have to pass the test. So, don’t keep going around the same mountain like the Israelites. Keep your eye on that next level.”

Esbend was born and grew up in Pietermaritzburg into a family of entrepreneurs. Both his grandfather and his father, who passed away when he was just 12, were in the construction industry and he admits that following them seemed the natural thing to do.

After completing his matric, however, he headed to the US for a year and a half where he helped his sister who ran a laundromat and a construction business.

Back in South Africa, he joined Waltons Stationery and then moved to the Road Traffic Inspectorate. Five years later, when his second son was born, he decided that the dangers and shift work weren’t worth it and moved to eThekwini Municipality where he worked in the signage and advertising department.

On the side, he was doing a few small construction jobs.

“I wasn’t satisfied. I knew I wanted to go into business and, specifically, into construction. I’d been trying to do some small jobs, but things didn’t always work out. I bumped my head and lost a lot of money, but I persevered,” he recalls.

About four years ago, Esbend remembers being so broke that he couldn’t scrape together enough money to buy a loaf of bread. His wife Karen, who he says has been by his side throughout, dipped into her salary to help pay his workers. Without a car, he relied on public transport and hired a bakkie to do jobs.

Having his wife Karen by his side is definitely his biggest asset.

“If we face a hurdle, we only give ourselves one day to mope. After that, we look for solutions and pick ourselves up,” he says.

He resigned in November 2016, using his pension payout to set up Sbenz Construction. Now that ‘everything was on the line’, he no longer had the option of failure.

Because he believes that a good business needs to have a professional image, he invested in branding his company and building a professional image to give his business credibility. Quotes and invoices were delivered on smart letterheads and he registered a domain name rather than resort to a Gmail address.

While subcontracting for one particular construction company, Esbend, he realised that the future of his company lay in the insurance sector. Repairs in response to insurance claims provided a significant and steady volume of work with reliable payments.

But being accepted onto the service provider panels of large insurance companies and financial institutions proved difficult. Companies looked for a track record and references from others in the sector.

He says the turning point came when he joined the Sekela Development Programme (Sekela), which develops and supports small enterprises through workshops and mentorship. This, in turn, resulted in Sbenz Construction being accepted on to the SA Home Loans (SAHL) panel of contractors that are called in to effect repairs in response to insurance claims.

“SAHL opened the door for me. Without being included on the SAHL panel, I would not have been able to get on to other panels. They have given us references. Now we are doing work for other major insurance brands and big banks and can grow our business,” he says.

Another game changer was the massive flash flood that hit Durban in October last year. As insurance companies scrambled to do the repairs, more contractors were needed and companies waiting in the wings were called in to assist with the excessive backlog of repairs that needed to be done.

“Through that storm, we made it on to one of our biggest clients panels, we had been requesting for some time but had been rejected,” he recalls.

Sbenz Construction completed about 200 jobs and has only just finished all their storm related work. Money earned was ploughed back into the business. This enabled Esbend to move to his much larger current office and employ another 20 people. With more big clients in the pipeline, he expects to grow his staff even more.

His association with SAHL also influenced his decision to study further. Following a Sekela advisory board session with SAHL which covered self-development, he registered with MANCOSA for a Bachelor of Business Administration. He has on-the-ground experience of much of the study material but believes this qualification will give him a far broader overview of business and increase his credibility with clients.

He is also focusing on improving his company’s Construction Industry Development Board (CIDB) grading which will open doors to other opportunities in the far broader construction business.

“When we joined Sekela, we were on Construction Industry Development Board’s Grade One, now we are in the process of applying for Grade Five. This is not something I even dreamed of. I thought if I could get to Grade Three, I would be fine,” he says.

At present, 95% of his work is for the insurance industry and this remains his primary focus.

Esbend’s long term plans include pitching for work from the petroleum industry and, in the medium term, he plans to partner with larger construction companies on major contracts as part of their Enterprise Development Programmes.