All images by Eamonn Ryan

Africrest Properties’ residential division specialises in converting office buildings into affordable housing and middle income housing. Its model was a little different in the case of
The Village, Bramley, as the site was a new build.

The Village had been through multiple owners between 1995 and 2012. At one time it was a bungalow-and cottage-type retirement village accommodation; and leased by the Botswana government for student accommodation for 400 students. After a failed effort to restore it for general accommodation for the 2010 Soccer World Cup, it had reverted to normal student accommodation during which it gradually deteriorated and fell derelict. Africrest bought the property in 2012, and completely demolished the existing structures to make way for higher density accommodation.
The development was done in three phases, starting with Sparks School – a 3 500m2 private primary school – which occupies a quarter of the property. Phase 2, the residential component of 230 units which is complete, and at the time of the interview the 229-unit Phase 3 was underway and 35% complete. 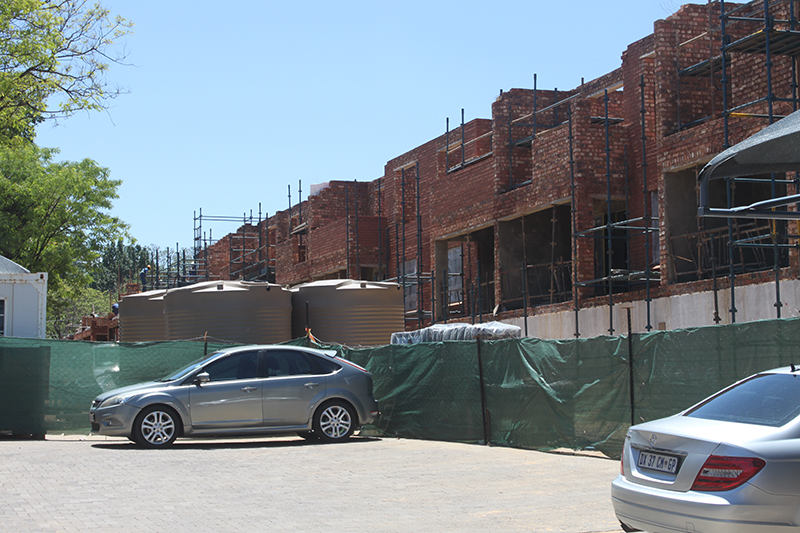 Work in progress at Phase 2.

Once complete, there will be 459 units made up of:

“It was previously a real eyesore,” says Grant Friedman, a director of Africrest Properties. Our philosophy in all our developments is to offer facilities and finishes you would find in high-end Sandton apartments – but at an affordable rental. Just because you are paying a low rental does not mean you are willing to accept a shoddy finishes apartment. The specs are the same for the apartments in each development as we perfect which finishes work best across our portfolio: subway floor tiles; USB plug points; stove-oven-extractor combo; granite tops; 600mm tiles; big windows; built-in cupboards. Most developments have a free gym, soccer courts on the roof, and laundromats. 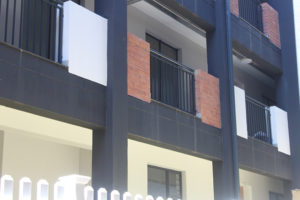 Several of the complete and let units in Phase 1.

“We try create communities in each building, with various activities. We survey residents to find out what is important to them, and then host seminars on that subject, for instance on financial wellbeing or mental wellbeing, and we host regular social functions to bring them together. They usually get a good attendance.

“We test everything ourselves from the perspective of whether we (the owners of the property) would like to live there.” The reason for this, says Friedman, isn’t entirely altruistic, but due to the cost of having vacant units. “The cost of a unit being occasionally vacant because we can’t find tenants, over the long term (ten to 15 years), would far outweigh the upfront cost of having more luxurious/ costly finishes,” adds Friedman.

Rentals vary from R4 800 for a bachelor unit to R7 500 for a two-bedroom unit, which Friedman describes as amongst the most affordable rental in areas such as Bramley, Randburg and Sunninghill – “below that would be the Gap level with some form of government subsidy”.

“Often the buildings we buy are not pretty, being older commercial office buildings, but the tenants don’t care as long as the fittings inside the building are great. We would rather we spend the money on the interior – lighting, biometric security and brand identity than on renovating the exterior, because tenants spend little time looking at a building and more time living inside of it.”
The mix of units within a development is often a function of the site layout and zoning restrictions such as the number of parking bays allowed. “The Council doesn’t differentiate between bachelor units and two-bedroom units, so if parking is limited it incentivises larger units. In a location such as a CBD which doesn’t suit families, we would encourage the mix of tenants to single people by only having bachelor units.

“The Village houses many young doctors, accountants and lawyers amongst other professionals. The location to business districts and the affordability of the apartments is very attractive.

Even if the rental is a little more than someone wishes to pay, Friedman says many people are persuaded once they do the math, and realise they are saving on a lot of other expenses that they may previously have paid for: free Wifi, gym, and reduced transport costs. “We’ve taught our leasing agents to quantify the numbers for prospective tenants. 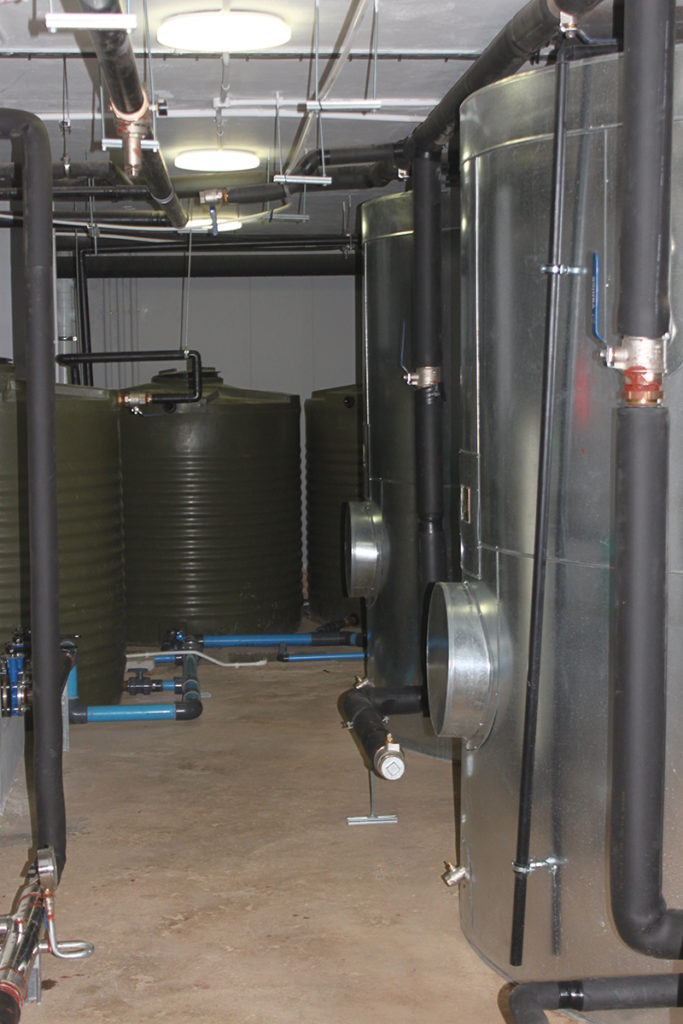 “Apart from the efficiency provided by the EESCO heat pump system, we are looking at a grey water system, and are testing out various systems, albeit such systems are extraordinarily expensive. All of our sites have solar generated power. We’re quite gung ho on solar and believe battery technology will improve with time and get cheaper. Africrest Properties is aggressively looking to purchase more buildings to convert from commercial to residual apartments as well as to purchase large pieces of land to develop new residential developments in the R4,500 to R7,500/ month rental market.

An important aspect of the design of the buildings was to ensure that, on what is quite a dense development, tenants would not be looking into each other’s apartments, or into a brick wall. “We started the design process with what furniture would go into each room, and then ensured the rooms were large enough. Our brief to the architect was to design the units around furniture.

EESCO (Elemental Energy) is a company whose core business is commercial heat pumps and hot and cold – water reticulation. It is currently installing an indirect ‘district heating’ system at The Village in Bramley. The biggest heat pump that it has manufactured and installed to date is a 500kw machine, while the current project under review involves a 320kw heat pump.

Andrew Lowe of EESCO (Elemental Energy), says: “EESCO was brought in to do the hot water system, for the seven blocks of both phases of the entire development. The brief was to design and supply an energy-efficient hot water system to supply 459 flats housing approximately 1 350 people. The design was to include hot water storage, heating system, pressure pumps and ring main feed to each flat, primarily using the municipal water mains.

“Instead of putting in seven heat pumps and seven tanks – one for each block – we decided on a central plant which would distribute the hot water to each block via a ‘primary ring main’. The primary circuit exchanges heat with each block’s ‘secondary circuit’ via our imported ‘Alfa Laval’ double pass plate heat exchangers. The municipal water enters the BPHE (Brazed Plate Heat Exchanger) at a design pressure of four bar and incoming temperature of between 12°C and 20°C and is instantly heated via the very efficient ‘double pass’ unit, to the setpoint which is currently 58°C,” says Lowe. 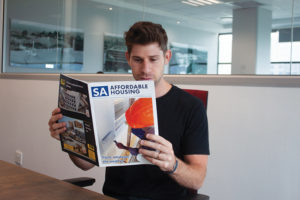 The primary heating circuit is a water / glycol mixture which is heated to between 65°C and 70°C by our locally manufactured heat pump via its BPHE condensing component. The primary heating liquid is stored in three 11 000ℓ steel glass flake epoxy-lined low-pressure storage vessels. The design pressure for the primary storage is only two bar making these tanks more economical than the standard four bar rated vessels. These storage vessels are stored on ground level, the heat pump however has been installed inside the roof plant room with a V-coil evaporator installed alongside in the open air where it achieves maximum heat absorption and has a lower noise impact.

“The reason for the ‘double pass’ type of heat exchangers is so that we can get the lowest possible return temperature from the primary loop. The lower the temperature of the water entering our heat pumps ‘condensing’ unit, the more efficient the heat pump is – this is primarily due to the ‘de-superheating’ of the refrigerant when it is condensed in the heat exchanger. We can achieve water outlet temperatures 5°C to 7°C higher than the condensing temperature of the refrigerant which further increases the efficiency of the unit. The central heating plant is a more economical way of providing the entire complex with hot water. The 320kW heat pump is designed to heat 33 000ℓ of water twice a day in seven hours when the ambient temperature is down at 8°C,” says Lowe. 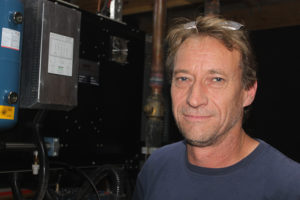 “The advantage of this alternative to a heat pump and tank in each block is that there is only one plant room, which uses less space and requires less maintenance. Then there are the additional benefits of less power supply needed for the entire complex and fewer main electrical cable supplies. Such a system isn’t more commonplace only because the concept isn’t better known in South Africa – this is only the second time we have done this, and as far as I know we are the only company doing this design. The circumstances of the site were ideal for it. We previously did the same concept at the Sierra Hotel in Randburg, which was of a smaller scale.

“The savings are huge, and the bigger a development the greater the savings in electricity consumption. It’s a function of more people, more water, more saving.”
The system brings a number of efficiencies to the development, says Lowe, primarily constant hot water at a considerably lower cost.
A challenge is that the water heating system has to be installed at the same time as construction is taking place.