In 2014, a R164-million tender to build over 900 houses was awarded to Johannesburg-based company, Siyavuna Trading – a close corporation owned by Thembekile Cynthia Mnisi. Siyavuna only built 55 of the 88 houses meant for Daluxolo, leaving 33 families still in the dark about their houses.

Houses were going to be built in Walter Sisulu, Francis Mel, Hani Park, Winnie Mandela, Mahlangu, Gwentshe, Mathemba Vuso and Daluxolo informal settlements. In 2015 it was reported that the workers at the company were on strike because they claimed they were earning less than R100/day. In 2017 slow progress of the housing project was reported, and last year the company went into voluntary liquidation. 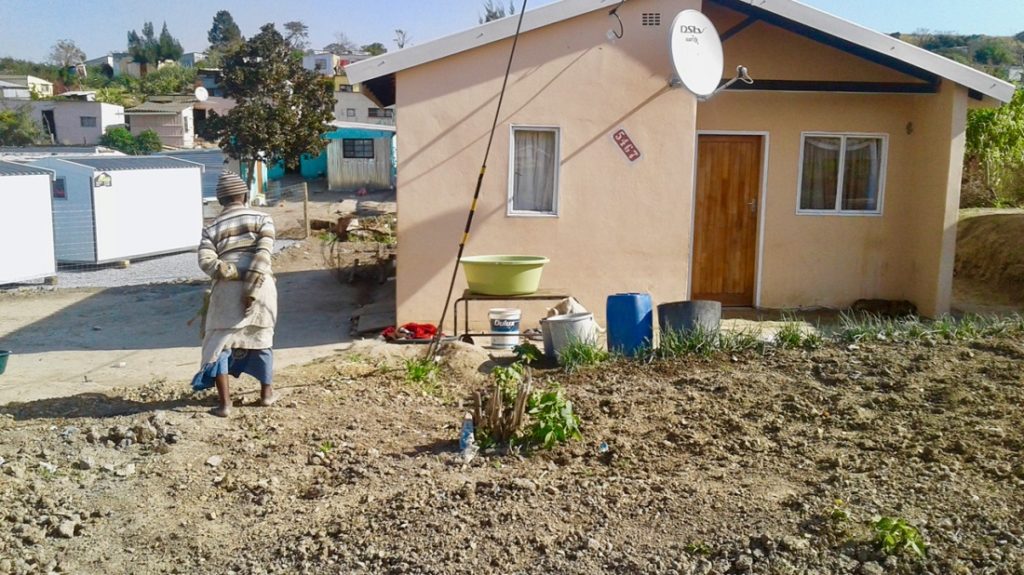 One of the 55 unfinished homes that beneficiaries of Mdantsane NU6 have occupied. Image credit: Nombulelo Damba-Hendrik

In addition to the financial story, there is a human story: in an article published by GroundUp [italics]magazine, Nophakamile Qongwana is 75 years old. Two months ago, she moved into an RDP house for the first time, even though the house in Daluxolo, Madantsane, was not finished.

She says she was excited when she was approved for a house in 2012. Construction started in 2015. The Siyavuna Housing Project was meant to build 88 houses in Daluxolo. Then the company left in late 2015, leaving 55 houses, but without roofs, windows or doors. Construction resumed in 2017 and roofs, windows and doors were added. But water and electricity were not connected. Fed up with waiting, residents decided to occupy their homes. Qongwana says she waited for an official handover, but none came.

“At least the houses were numbered, hence I could identify which one is mine,” says Qongwana. Then she saw that one of her home’s windows was broken. She decided to move in. She was the last to occupy the houses. She had been living in a shack since 1985. “My mother died living in a shack. I was 46 when she died in 1990. She dreamed of having a decent house but she never got one.”

Ward councillor Mashwabade Gcilishe (ANC) says some of the houses were left at foundation level because they were built on top of a sewerage pipe. He says a construction company has been hired to install another mini-sewerage system to make sure the current sewerage pipe does not affect the houses.