The renewal of Johannesburg’s city centre is getting a further boost with the expertise of Raubex Building, part of the Raubex Group’s infrastructure division. 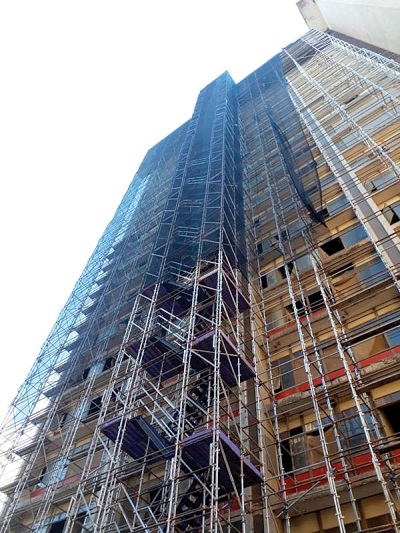 Work is well underway on the refurbishment of Union Square, a 19-storey block at 80 Plein Street in the heart of Johannesburg’s original central business district. The project, scheduled for completion in the last quarter of 2020, is being undertaken for the Johannesburg Social Housing Company (JOSHCO), under principal agent and architect, Heather Dodd from Savage and Dodd Architects. According to Juan Jardim, Raubex Building’s senior site manager on this contract, the project involves a number of important innovations – and more than a few challenges.

“The building was previously an office block, and is being repurposed for residential use,” says Jardim. “This means the installation of considerably more walling and other infrastructure than the building was initially designed for.”

While the ground floor at street level will be used as retail space, the first floor to the 19th floor each accommodates 18 residential units. The range of apartments includes bachelor flats of 19m2 in size, one-bedroom units of 35m2, two-bedroom units measuring 43m2 and four-room communal cluster units of 94m2. The building is served by two passenger lifts, a service lift and a goods lift, as well as three fire staircases. There are three basements for parking.

“Load-bearing considerations led to the selection of the lightweight Imison walling system, achieving a significant weight reduction when compared to bricks and mortar,” he says.

The Imison system is applied as a series of interlocking wall panels made from the high quality Neopor insulating material. The panels are installed in a framework that is fixed to the soffit and slab, after which the services such as conduits and pipework are fitted. A mesh is installed over the panels, which are then sprayed on both sides with two layers of a high density fibre-cement called Fibrecote. The final layer is then floated for a smooth finish. A total of 15 500m2 of Imison panels were used, along with 32 600m2 of Fibrecote plaster.

“The use of this system makes for easier loading, transportation and construction,” Jardim says. “The panels also deliver a high level of soundproofing, and a two-hour fire rating – enhancing the quality of life for residents and improving safety.”

“This project provided us with another opportunity to support local participation with the use of local labour and to train small local businesses, mainly in carpentry, specialised walling system installation, tiling, brickwork, plastering, painting and electrical work.”

The need to minimise the weight of additional infrastructure also affected the choice of water heating options. Union Square has a gas-heated boiler system on every fifth floor which distributes hot water to the apartments. In addition to refurbishing and augmenting the inside of the block, Raubex Building also replaced the façades. 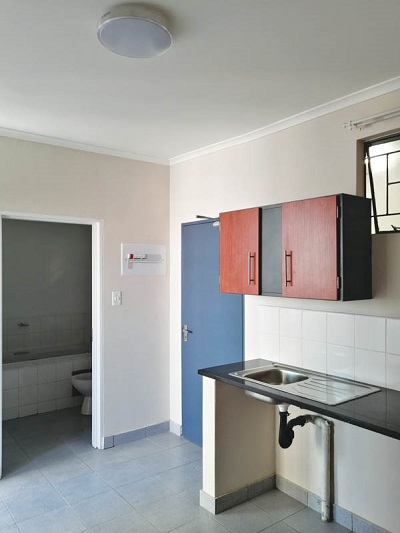 A view inside one of the apartments.

“This was necessary because of the ageing concrete on the outside of the structure, which meant that the original plaster and tiles were delaminating,” Jardim says. “About 5 000m2 of old plaster and tiles had to be broken from the face of the building, exposing the concrete. We could then break off loose concrete where necessary and clean the exposed reinforcing bar.”

So extensive was the outer decay that some 33 000 litres of the specialised BASF MasterEmaco S 5410 CI – a fibre reinforced structural repair mortar with active corrosion inhibition – was used in the repair of the concrete structure. These repairs could then be followed by waterproofing, plastering and the applying of a Marmoran finish, as well as glass replacement and general painting.

To allow the façade refurbishment to be conducted safely, scaffolding for the full height of the building had to be engineered and installed. In addition to being tied into the building, the 350 tonnes of scaffold also had to be back-propped into the basements to accommodate its weight. The quality and safety of the system was inspected and signed off by a qualified structural engineer. Netting was then also installed to eliminate the risk of any falling materials, as this labour-intensive process was conducted at heights of up to 80 metres. 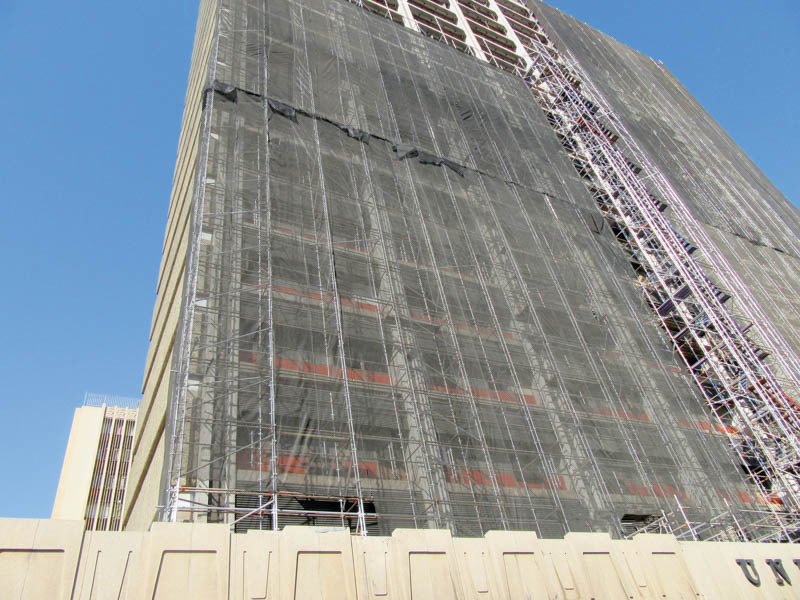 Netting was also installed to eliminate the risk of any falling materials.

For its tenants, Union Square is conveniently located right across the road from the busy Noord Street taxi rank, which is among the largest in the country – serving local and international commuters. For Raubex Building, however, this location made for challenging logistics, especially as the property extends onto the sidewalk and street on every side, providing no lay-down area for materials and equipment.

“Most taxi activity would begin early in the morning and continue until 19:00,” Jardim says. “This meant that our deliveries were made mainly in the evenings. The night shift would then move the material to the floors where it was required, to facilitate the following day’s work.” 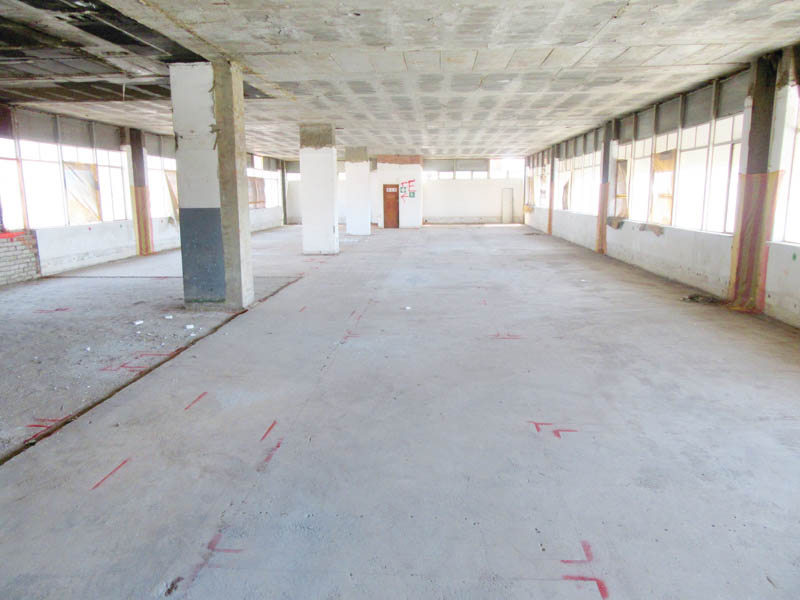 Load-bearing considerations led to the lightweight Imison walling system being used. Here, setting out of the internal walling is being done. 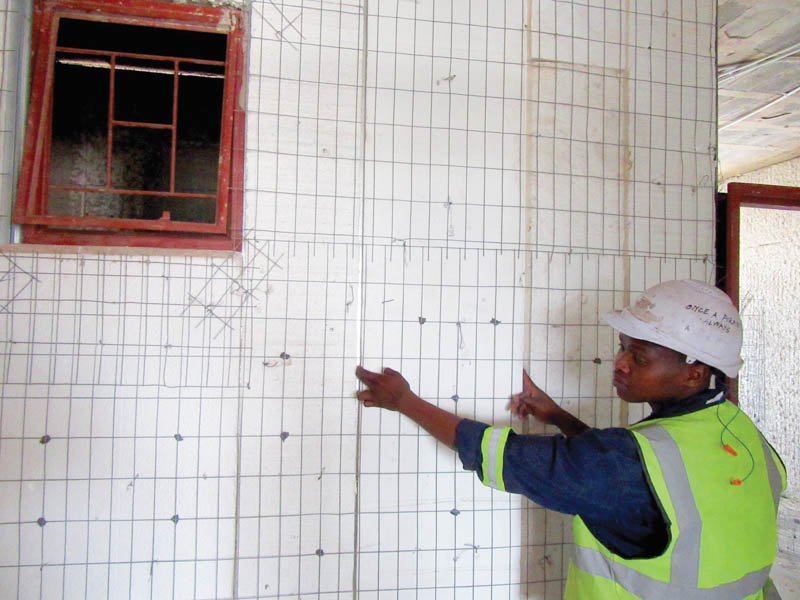 Mesh being installed after which they are sprayed on both sides with two layers of a high density fibre-cement.

Material was conveyed using a two-tonne hoist that ran the full height of the building. Rubble was also removed at night, by tipper trucks fed by wheelie bins. He notes that the building’s first-floor plinth was just about the only space available to lay down materials and equipment.

“This project provided us with another opportunity to support local participation with the use of local labour and to train small local businesses, mainly in carpentry, specialised walling system installation, tiling, brickwork, plastering, painting and electrical work,” he says.

There were several of these businesses from Johannesburg’s Ward 59 involved, as part of Raubex Building’s local participation programme, and this included PC Builders, a 30% QSE partner on this project.