Notwithstanding South Africa’s economic woes, historically low interest rates mean that one of the trends Cosmopolitan Projects has been noticing at its Westview 2 Security Estate, is a market desire to up-spec the traditional affordable house. 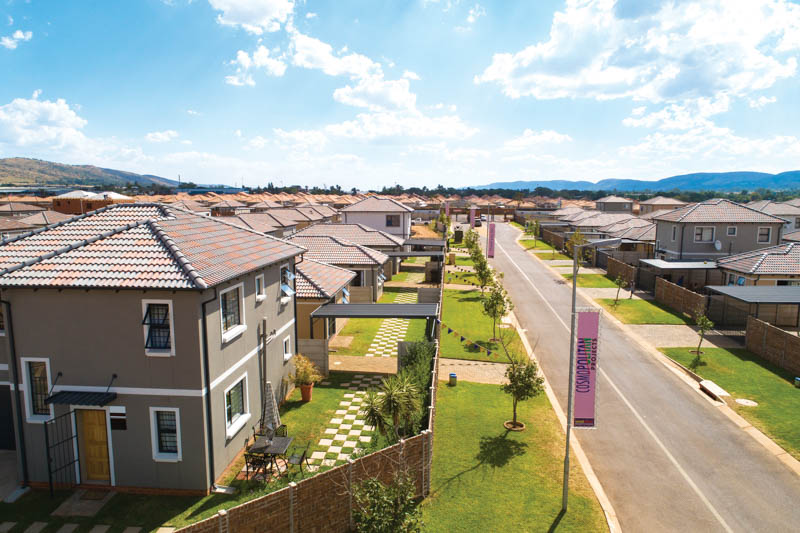 This affordable security estate is something new for Cosmopolitan Projects. Though still a mass development, it comes with the type of features usually associated with security and lifestyle estates. Phase 2 will enclose 821 houses (of which 449 are already occupied, 103 under construction and the remainder still to be constructed) alongside the 495 houses already occupied in phase 1. The total development will ultimately comprise 1 316 houses and is due for completion within the next 12 months.

This project reflects the big aspirational shift in the affordable housing market of people wanting to move to affordable suburban security estates. 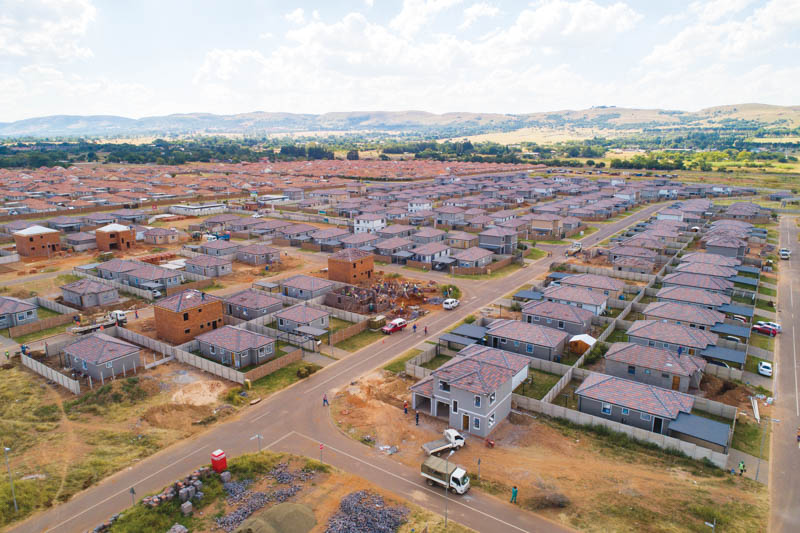 The concept for Westview was originally a more affordable one (see the ‘Sky City’ model in SA Affordable Housing May/June issue). However, market demand was found to be for something more upmarket than gap. “This market changes incredibly quickly,” says Cosmopolitan Projects’ senior marketing manager, Auret Vorster, “and the slowest seller we have today is, in fact, the entry-priced unit.” Another noticeable trend is a shift in the market’s preference towards open-plan living, and Vorster explains that mid-development they had changed the layout of some of the larger units to make it more open-plan. This evolution came about as the developer noticed that many residents were making internal alterations to their houses breaking down the wall to the garage to extend their living space. They would sacrifice their garage for additional living space and replace it with a double carport.

Another prominent trend they are noticing in this affordable market is the need for security, which has already been a longstanding trend in South Africa’s higher cost property market. Vorster describes it as “the single biggest selling point” on this mass estate and the reason why the term ‘security’ features in the development’s name. The estate has an HOA which is successfully collecting levies which covers the security and the upkeep of the common areas and facilities. 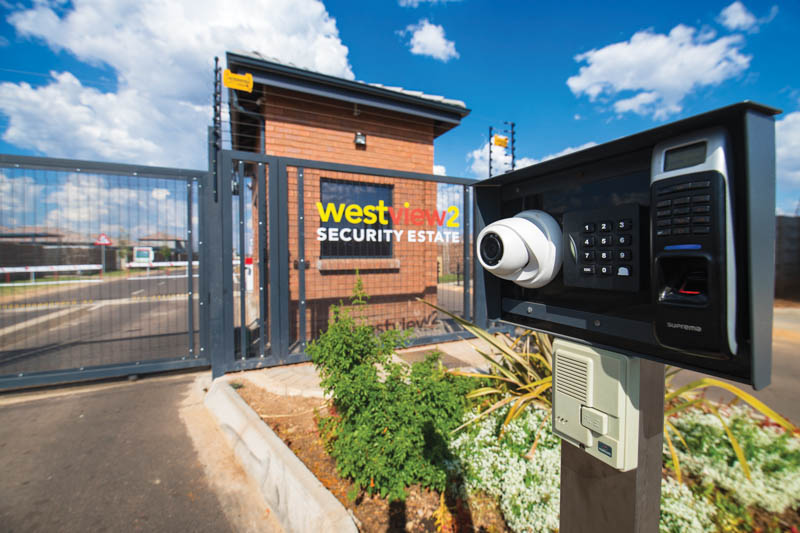 The entrance, with its emphasis on security. Image credit: Cosmopolitan Projects

Senior project manager, Leroy Coetzee, says Westview 2 is also their first development offering fibre internet connectivity (10Mps uncapped), and the take-up by the market has outperformed expectation. This tailored fibre deal is a first for the affordable market, he claims.

The popularity of these features shows a steady market shift for the more decerning buyer and higher income earner in the affordable sector. This is also reflected in the changes they have already made to their designs: one being the inclusion of Juliet balconies with sliding doors, and another towards open-plan living. “Public sector employees make up a large portion of our target market and most of these individuals’ income was not too severely impacted by the national lockdown. After the easing of lockdown level 5, we experienced a surge in interested buyers at income levels of up to 30% above the minimum qualifying criteria. This trend that we are seeing here at Westview is not only due to the interest rates cuts,” says Vorster. “The larger, more expensive houses are more popular than the smaller lower priced houses.”

There are several lifestyle features, such as parks with outdoor gym equipment and children’s play areas including a shallow swimming fountain (as opposed to a swimming pool with its inherent risks) which are hugely popular. Elsewhere, Cosmopolitan’s developments sometimes contain additional facilities such as schools and shopping centres – but Vorster explains this wasn’t necessary at Westview as it is a developed suburb with all those facilities already present within walking distance.

“Though still a mass development, it comes with the type of features usually associated with security and lifestyle estates.”

The location, being a fifteen-minute commute from the Pretoria CBD, on the border between Gauteng and the North West Province, as well as adjacent to an industrial area, is prime.

Affordable housing is an aspirational market – buyers want extra features and finishes as far as possible. It is a fine line to accomplish this while retaining its affordable character. It is done so by developers such as Cosmopolitan’s standardisation, tight management, and economies of scale. Over the years Cosmopolitan has optimised their designs and even though the appearance and aesthetics may change, these optimal footprints mostly remain the same, enabling them to deliver at scale. 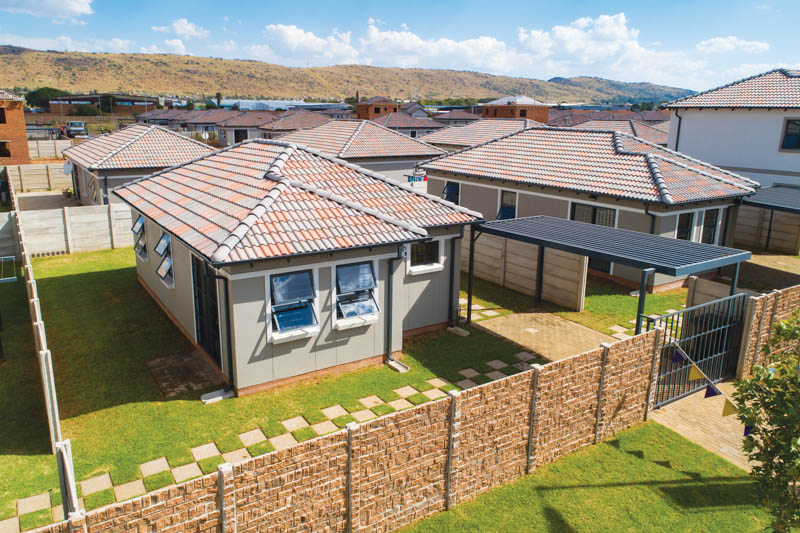 Some of the completed homes, showing the carefully selected colour schemes to give a uniform look to the estate. Image credit: Cosmopolitan Projects

“The planets aligned here,” says Coetzee. “We were afforded the opportunity to establish a security estate, next to an already developed suburb, surrounded by the scenic Magaliesberg mountain range. At the same time, we were catering to the untapped market coming from the North West mines and factories as well as the Pretoria CBD. Being permitted to develop a security estate in this highly aesthetic location, which is rare for an affordable development, combined with the strong market demand for this specific product culminated in the success of this project.”

Cost savings were achieved in many ways. One was that the company has owned the land for more than ten years. Coetzee explains that the Cosmopolitan model is to buy undeveloped land ahead of time and wait for the ideal opportunity to develop it. Municipal approvals on developing land, as well as building plans, can take a very long time if not managed meticulously. Delays in approvals and compliance can put the project’s profitability in jeopardy which can lead to its demise. 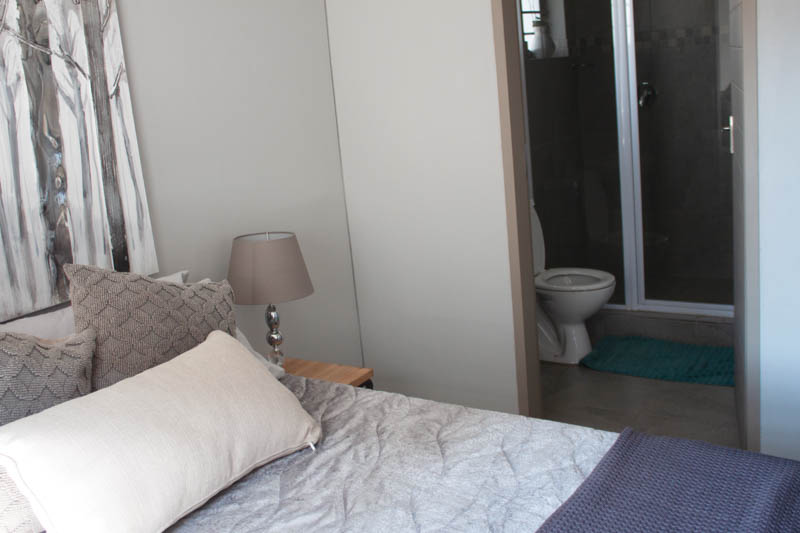 The interior of one of the show homes. Image credit: Eamonn Ryan

This is why this model only works with dedicated, in-house operators and managers. It has to be a well-oiled machine,” says Coetzee. “There’s a list of hoops we have to jump through to get a development like this off the ground including compliance with regulations and procedures prescribed by the municipal council and the NHBRC and delays due to external factors such as strikes, unrest and disruptions. We have to find appropriate solutions to address our risk on a daily basis. Negotiating deals with suppliers is an art in itself and without volume, the affordable housing model would not work.” It is for this reason that Cosmopolitan Projects does most of these functions in-house – land development, project management, sales, and marketing as well as property management. 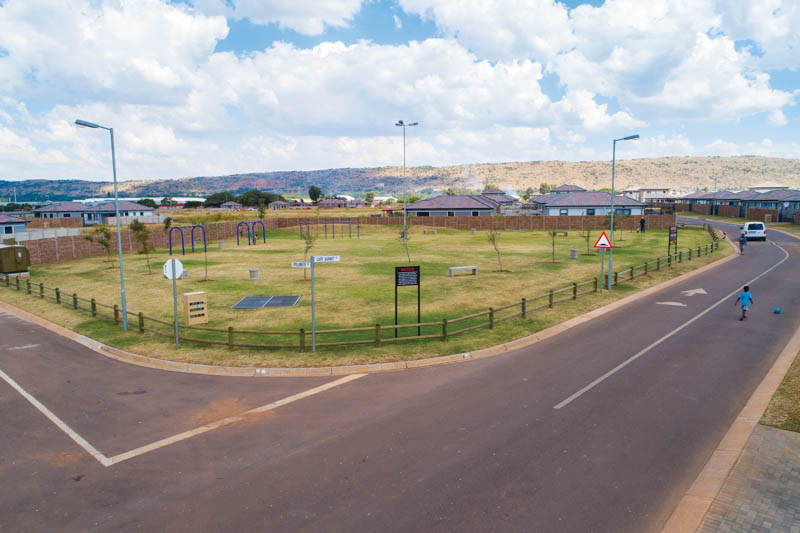 Another efficiency was that stands and houses, initially sold ‘plot and plan’ on order, were changed to construction commencing on a pre-nomination basis in blocks. This became possible as buying trends emerged. Coetzee says this alone saves approximately two months in building plan approval time, which results in financial savings and quicker delivery to buyers. “This also enables the contractor (the construction was outsourced by Cosmopolitan Projects to Maxwell Gordon Homes) to better control and manage production and delivery since they could focus on one area instead of continuously shifting from one site to another.

“The risk with this is the rapidity with which this market changes. It could yet happen with further interest rate cuts, which can affect the market overnight,” says Vorster.

In Phase 2 we opted for PV (photovoltaic) panels on the geysers which generate electricity for a normal electric geyser. It is more aesthetic with no geysers visible on roofs, making the development look much tidier – and the energy saving is much the same as thermosyphon solar geysers. We have 135mm insulation inside the ceiling – as dictated by SANS 10400-XA – as well as aluminium window frames,” says Coetzee.

The choice of products and systems is left to the construction contractor, with Cosmopolitan Projects providing the specs – the basic stipulation being that all products are SABS approved – and finally approving the selected products. “We are price conscious, but the most fundamental requirement is that suppliers must be able to deliver quality volume, support and service. Our contractors are consequently obligated to check on suppliers’ factories to verify their capacity and quality. We try to keep the spec of building materials as standard as possible to enable us to switch between suppliers if needed, to ensure that we can maintain delivery should a supply issue arise.

“We have to receive exceptional service from our suppliers to achieve what we do,” says Coetzee.